Being Erica: Series One DVD 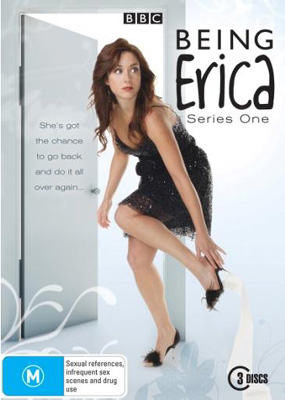 One woman with the chance of a lifetime

Erica Strange is 32, smart and pretty. But her life's going nowhere and she can't help but blame her past for her current misfortune. So what if she could change the past? That's where Dr Tom can help.

Back in high school, Erica (Erin Karpluk The L World, The Bionic Woman, Godiva) thought she'd grow up, meet "the. guy, get "the. career and have a couple of beautiful, talented children and ride off into the sunset. But somehow, it just never happened. Now she has the chance of a lifetime.

After a series of mishaps, she finds herself in hospital where she meets the mysterious Dr Tom (Michael Riley) - a therapist who seems to know a lot about her. Dr Tom issues Erica a challenge; if she wants to fix her life he can help, but once she's committed, she can't back out. Desperate, Erica accepts his terms, and finds herself flung back into her own past.

A young person in full possession of her adult mind, this is Erica's opportunity of a lifetime. Quantum Leap meets Ally McBeal as each episode sees Erica deal with a different event from her past, as she confronts old friends and foes, agonises over tough decisions and gets her heart broken. By making different choices can she alter her past and transform her present? Funny, tragic and uplifting in equal parts, Being Erica is a drama about the ways we hold ourselves back from following our dreams. As seen on ABC2.