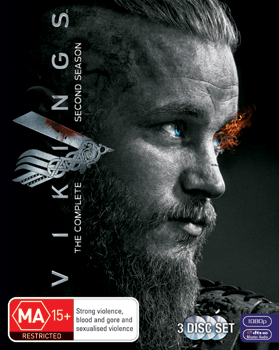 'Vikings" centers on Ragnar (Travis Fimmel), a restless young warrior and family man who longs to find and conquer new lands across the sea and claim the spoils as his own. Now he is an Earl, allied with King Horrik (Donal Logue). With more power than ever before, his desire to sail west and explore new kingdoms remains unquenchable.

Yet there's a heavy price to pay for Ragnar's ascent to greatness. Season two brings crises of faith, of power, of relationships. Brothers rise up against one another. Loyalties shift from friend to foe, and unlikely alliances are formed in the name of supremacy. Ragnar's indiscretions threaten his marriage to Lagertha (Katheryn Winnick), tearing him and his beloved son apart. Plots are hatched, scores are settled, blood is spilled…all under the watchful eyes of the gods.

New to the cast of Vkinings this season are Alexander Ludwig (The Hunger Games) as Bjorn, the intelligent and bold warrior son of Ragnar Lothbrok, and Linus Roache (Law & Order) as Ecbert, King of Wessex, a man of strength, knowledge and undisguised ambition. They join Travis Fimmel as Ragnar Lothbrok; Katheryn Winnick as Lagertha, a fierce shield maiden and Ragnar's wife; Clive Standen as Rollo, Ragnar's impulsive, wild, care-free brother; George Blagden as Athelstan, a young and not-so-innocent Monk; Jessalyn Gilsig as Siggy, beautiful wife of the late Earl Haraldson; Donal Logue as King Horrik, who desires to make the increasingly famous Earl Ragnar an ally and supporter; Gustaf Skarsgard, a ship builder who designs the new generation of Vikings ships; and Alyssa Sutherland as Princess Aslaug, Ragnar's new love interest.

Blu-ray Special Features:
BD Exclusive – The Vikings Sagas - An Interactive Archival Exploration of the Viking Sagas. Use the BD remote to select an icon within the Sagas to hear a detailed deconstruction told by Viking historians
A Warrior Society: Rites of Passage - Viking Historians unravel more fascinating mysteries of the Viking culture delving deeper into their rich history revealing the real world practices of the Viking people. Topics for exploration include: Viking Birthing Rituals, the significance of a young man receiving an armring, and the preparation undertaken before a young man or shieldmaiden's first battle.
My Family, My Enemy - Creator Michael Hirst details the story arcs of season two and how compelling stories from history influenced the script, with further insights from the cast members and their roles in this season.
Imagining and Executing Climactic Battles – A behind the scenes exploration into every aspect of planning and execution of the key battle sequences, before intricately deconstructing every stage of preparation for the climactic VIKING battles in season 2.
Audio Commentary on 'Blood Eagle" featuring Michael Hirst and Gustaf Skarsgard
Audio Commentary on 'The Lord's Prayer" featuring Michael Hirst and Gustaf Skarsgard

Journey to a thrilling ancient world in this epic new series focusing on history's bravest and fearsome...