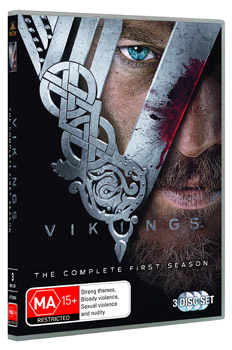 Question: When Michael Hirst first approached you about Vikings, what interested you?

Joan Bergin: Michael pitched to me the idea with they were going to Russia. The Vikings, it is said, founded some of the major cities of Russia. I have a dream of designing the most wonderful Byzantium clothes. Now I tease Michael that we ended up in Dublin, which the Vikings also founded.


Question: What do we know about Viking clothing?

Joan Bergin: What is available from the grave finds: tiny little fragments of cloth stuck in brooches. Scientists in laboratories can tell you exactly what colour it was, how it was woven, what the tweeds were made of. A lot of Michael's stories are based on the Norse legends. They are extremely detailed, talking about the wool or rituals.


Question: What sort of research did you embark on?

Joan Bergin: There's quite a lot available. There's a tremendous interest in Vikings. There's sort of a zeitgeist thing around period television series. People were fascinated by Henry VIII some years ago. Now there's tremendous interest about Vikings, German scholars are writing extensively about them. There's a huge Viking exhibition in the London Museum, but I went around anywhere I could. I looked at the various archaeological jewelry finds.


Question: Are there common misconceptions about Viking clothing?

Joan Bergin: They had no horns on their helmets. They were the first people to go around with toothpicks, tweezers for pulling hairs out of their nose. They always carried a second set of clothes with them. When they came to Dublin, they smelled so beautifully that women fell in love with them. The fact they were six foot tall and blonde probably helped! They were savages and barbarians, though. Don't forget the pillage and rape. I discovered that 'Viking' is more a culture than a religion. Back then, people thought you if were a pagan you were a savage. Quite the contrary is true. It's a fairly complex and detailed culture. Wealthy women wore hand-pleated white linen under their tunics.


Question: Did they wear a lot of fur?

Joan Bergin: They dyed furs with berries. We tried that and we were left with things that looked like decomposing rats. Then I discovered someone in Paris who evolved a system of dying fur while keeping the natural shadings. We splurged some of our budget on furs.


Question: In designing Viking costumes, do you also employ some creative leeway?

Joan Bergin: You have to. I think the most successful costume dramas are where you saturate yourself with what was there and then you bring a modern sensibility to it. Otherwise, people think 'How weird'. You have to get the audience to think, 'How foxy, and how interesting'. Crouching Tiger, Hidden Dragon knocked me for six. What is this world I know nothing about? That's what you try and do with the Vikings and Michael has done in the writing. The props, hair and make-up; there's been a lot of very imaginative work. People have entered into this strange world, which is quite Celtic if you're Irish. Lots of jewelry was found on the streets of Dublin. The Tara Brooch is really a Viking brooch.


Question: Do the clothes one wears give an insight into their character?

Joan Bergin: You have to keep away from anything being just costume. You work with the actor to create something that takes the audience to the next step of the character. If you get it right, the audience shouldn't notice what the costume designer is doing. Perhaps you've given the character a dark jacket because he's not feeling great that day or red because he's going into battle.


Question: Can you talk about designing Ragnar's costume, and the insight it gives into his character?

Joan Bergin: Quite a bit of it came from Travis. Travis rooted his character as being a farmer. Travis is keen that the earthy element comes through. Anything he wears is almost to show he is not somebody who would spend all his money on clothes. He would rather spend it on boats.


Question: How about Ragnar's Season One nemesis, Earl Haraldson?

Joan Bergin: Wonderful. I had acted against Gabriel Byrne for many years, so he was amused at our lives coming together again. He's terrific. He was the character. He wore the clothes very well. But he was different to Ragnar. He was old school. Charlemagne [the Holy Roman Emperor from the 9th century] said, 'I dress like this so people will know who I am'. That was the dictum for Gabriel's clothes.


Question: How did you approach dressing Katheryn's character?

Joan Bergin: As a shieldmaiden, Katheryn is a woman warrior. She can move, work, and fight in these clothes.


Question: Can you talk about the materials you use?

Joan Bergin: A lot of wools and linens. The team boils the wools, dyes them, and adds leather and oils, so you get different kind of textures. We have developed a lot of skills in our workshop. It's like a medieval workshop. People who visit are astonished. A lot of skill goes into it.


Question: How do you design clothes for the battle scenes?

Joan Bergin: As costume designers, when you see somebody with a handheld pump full of blood being poured on something that took two weeks to make, it can be annoying! We have to create two or three versions of the same costume. That's very hard on my department. By the third one, you never want to see the costume again. Also, there are a lot of extra actors because the riding is so fierce. We need riding doubles.


Question: What have you taken from working on The Tudors? Are there a lot of familiar faces around you?

Joan Bergin: Yes, this team grew to such a skill. Episodic television is so different to feature film work because of the speed you have to get everything done. No matter how artistic you are, it has to be ready on the day.


Question: Do you consider your role as a storyteller?

Joan Bergin: It should be, if it's a success. It's like a group of storytellers sitting around a fire with one tale to tell. The costume designer tells part of the story, but it can't be that much different from everyone else's. It's a blend of talent.

Created by Michael Hirst (Elizabeth, The Tudors) and starring Travis Fimmel (The Baytown Outlaws), Gabriel Byrne (The Usual Suspects, Ghost Ship), Katheryn Winnick (50 First Dates, Two Weeks Notice) and George Blagden (Wrath of the Titans, Les Misérables), Vikings tells the gripping story of Ragnar (Travis Fimmel), a fierce Viking warrior, who yearns to fulfil his destiny as an explorer and conqueror, alongside his ambitious brother Rollo (Clive Standen) and loyal wife Lagertha (Katheryn Winnick). As Ragnar leads daring raids in distant realms across the ocean, treacherous forces in his Norse homeland conspire against him. Faced with shocking betrayals and the temptations of a mysterious seductress, Ragnar must wage war on the battlefield – and within himself – to protect his freedom, family and life.

Dating back to a time of mysticism, religious oaths and ancient pacts, Hirst's series combines an enthralling story of warriors with the realities of Norse history. Vikings is also a story of family and brotherhood, capturing the love and affection between Ragnar and his wife, Lagertha (Katheryn Winnick), a respected warrior in her own right. It is the tale of Ragnar's brother Rollo (Clive Standen), a fierce fighter who simmers with jealously; of Earl Haraldson's wife Siggy (Jessalyn Gilsig), a dutiful beauty who may be less than loyal; and of the monk Athelstan (George Blagden), whose Christian morals clash with the Vikings' pagan society.

Vikings is packed with fascinating featurettes offering a closer look at the culture of these Norse warriors including the history, legacy and armoury, as well as a captivating behind-thescenes look at the creation of the series and its epic battle scenes. In addition, Vikings boasts deleted scenes and a running commentary of Rites of Passage (Episode One) from series creator Michael Hirst.