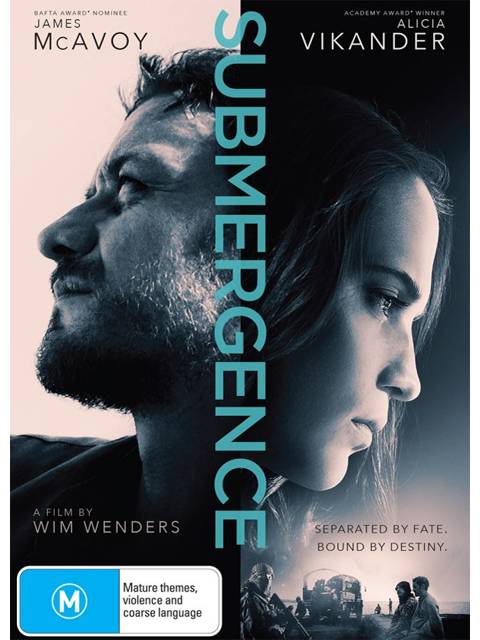 An Epic Story of Life and Love

James More (McAvoy) is a British Secret Service agent. He is about to go on a dangerous undercover mission to Somalia to track down a source who can provide details of suicide bombers infiltrating Europe. Danny Flinders (Vika nder) is a bio - mathematician working on a deep - sea diving project to explore the origin of life on our planet. When they meet by chance, they fall rapidly, and unexpectedly, in love. But their work will too soon tear them apart, and when James is taken hos tage by Jihadist fighters, he has no way of contacting Danny to tell her he is alive before she embarks on her perilous quest to dive to the bottom of the ocean.

A multi - layered story that embraces some of life's most profound concerns, Submergence is ba sed on the novel by J.M. Ledgard, who was inspired by his experiences living and working in Somalia. Ledgard constructed a highly intricate, cerebral novel interweaving three distinct but overlapping worlds. "The novel has three strands," he says. "One str and is set in Africa and about a British spy who is kidnapped by a Jihadist group. The second follows a professor at Imperial College, London who is a bio mathematician, which means she studies the volume of microbial life in the oceans. The third sees the se two characters meeting in a hotel in France and forms the central part of the story. They have a passionate love affair. So really, it is about science, belief and love." Director Wim Wenders says about the main actors: "James McAvoy is one of the grea t actors of his generation and he has demonstrated that with several films .

He has played a very wide range of characters, but i n there was also an actor who was able to deliver something very, very personal and close to his heart. And Alicia Vikander was very much as I imagined the character," continues Wenders. "She is very charismatic, very beautiful, very brilliant, and almost h as an alchemy with the camera."

Separated by fate. Bound by destiny. Submergence is the compelling and mesmerising tale of two lovers connected by something much deeper.