Nathan Drake sets out on a quest for the fabled Atlantis of the Sands on PlayStation 3.

New locations, new challenges, stunning environmental detail. Nathan Drake's journey takes you to a variety of spectacular locations around the world from Europe to the Middle East.

Continue your mission in PlayStation Home* and try out three great mini-games.

Visit apps.facebook.com/mypsgames to try the My PS Games application on Facebook and tell us what you think of the game and read reviews by other Facebook members. 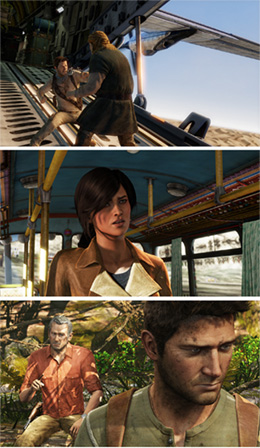 Suited, booted and finding himself in a perilous situation once more, wisecracking fortune hunter Nathan Drake returns to PlayStation 3 to find a bruising welcome party in Uncharted 3: Drake's Deception.

London's seedy backstreets play host to the settling of a 20-year-old score, as Drake and his mentor and sidekick Victor Sullivan try to flush out an old acquaintance and safeguard a family heirloom once and for all. Yet Drake's desire to revisit his past threatens to engulf him in something far more sinister, an ancient plot casting a shadow as far back as the reign of Queen Elizabeth I.

Swapping Europe for the harsh sands of the Middle East, Drake sets off on his most daring adventure yet, inspired by Lawrence of Arabia's pursuit of the fabled Atlantis of the Sands, buried in the Rub' al-Khali desert. Along the way he will face the full force of a centuries-old occult organisation determined to reach the legendary city first and prevent its terrible secret from being revealed.

Amid flying bullets and flailing fists, Drake realises his quest for unimaginable wealth has turned into a desperate bid for survival and to win, he must confront his darkest fears.