Celebrate the joy of play in Toy Story 3: The Video Game! Fans can play as Buzz, Woody or Jessie as they run, ride and fly through scenes inspired by the upcoming release of the Disney™ Pixar animated film, Toy Story 3. Experience key moments, interact with new and returning characters, and visit locations seen in the film. The unique Toy Box mode allows players to unleash their imagination and creativity in a new open world and play with Andys toys their way. As Buzz, Woody or Jessie, players can choose what activities they want to do and the order they wish to do them. The more they use their imagination and create their own story, the more they get rewarded.

* Hours of fun to be had following the films story line
* All new Toy Box mode allows access to an open world, non-linear gameplay for total freedom
* Complete missions to earn rewards, including gold and new customizations
* Purchase new toys from the toy catalogue to change and introduce new ways to play
* Customize and add new buildings, then change how they look with paint options, textures, accessories, landscaping and tons of other fun modifications
* Personalize the look of the townspeople by throwing them into various buildings to change their hairstyles, hats and outfits
* Race through levels in various vehicles
* Change the rules by adding Deluxe Playsets into Toy Box mode, such as Sids Haunted House, that will add new themed characters,customizations, mounts and toys

Review: What a sensational game! With so many varying levels, and ways you can play Toy Story 3, it puts many of the adult games to shame. Choose from a variety of characters to take on the many challenges including 8 levels in Story Mode that vary depending on your character. This is more than a 1 day play for the experienced gamers, and will keep kids & parents entertained. For those who are familiar with Toy Story storyline, you will appreciate the intricate detail that has gone into this game, with outstanding graphics and manoverability if you haven't already got it, add it to the top of your Christmas list. 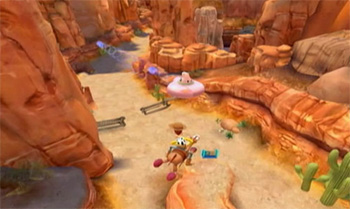 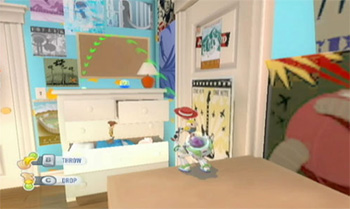 Aussie parents a bunch of big kids at heart

An overwhelming 9 in 10 Australian parents wish they had more time to play with their children, according to the Toy Story 3 video game: 21st Century Playtime report released today.

The research* found that while 74% of Aussie parents believe their own kids have enough playtime, it seems they're a bunch of big kids at heart who want to engage more with their kids, especially when it comes to playing new virtual forms of entertainment such as videogames.

The report revealed nationally:
· 97% of Australian households own one or more videogame consoles
· 79% admit they enjoy playing videogames with their kids
· 4 out of 5 videogame experiences are played as a shared family experience, busting the myth that videogames are an isolating and unsocial experience for kids
· 60% of parents average up to 2 hours per week playing videogames with their kids, which is the same amount of time they'll spend on playing sports, board games, going outside and playing with regular toys.

As Mark McCrindle, futurist and demographer notes, "The Toy Story 3 video game: 21st Century Playtime report is an interesting insight into Australian parents' perceptions of their kid's play time. Overall, it's found that parents highly value playtime and are increasingly partial to, and adopting, new forms of entertainment like videogames as part of the playtime mix."

"There's no doubt playing with toys has changed in the 21st century, given entertainment has become more and more influenced by technology as the new Toy Story 3 video game illustrates. Australia is a tech savvy nation, so it's no surprise that parents have come to accept videogames as a valuable and complementary form of entertainment for children today, as long as they provide creativity and educational benefits."

Indeed, 41% of parents said they find it hard to monitor what games are appropriate for children. However for the majority (74%) of Australian parents, they believe that videogames can have positive benefits for their kids when played in moderation, such as improving motor skills and hand-eye coordination (94%); analytical and problem solving skills (91%) and creativity (72%).

The new Toy Story 3 videogame, which launched on June 17, marks a new generation in gaming and family playtime. Inspired by the popular Disney Pixar film, the Toy Story 3 video game allows kids to create their own interactive toy world and unleash their imagination with the unique Toy Box mode, showcasing how the traditional pastime of playing with toys has been recreated in the virtual world.

Australian parents on playtime:
· 9 out of 10 Australian parents wish they had more time to play with their children
· On average, parents spend most time with their kids on the following activities per week:
o Watching TV/Movies/DVDs - 3.25 hours
o Playing in parks/gardens - approx. 2 hours
o Playing sports - approx. 2 hours
o Playing with toys - 1.5 hours
o Board games - 1 hours
o Video games - 1 hour
· When asked to rate how important certain benefits were for their children when providing entertainment for them, 78% said stimulation was important; as well as problem solving skills (75%) and motor skills (74%).

Australian parents on videogames:
· 76% believe videogames can have a positive influence on children
· Aussie parents are big kids at heart when it comes to videogames:
o 79% enjoy playing videogames with their kids
o 79% say videogames are mainly played in their house as a shared family experience, either with the whole family or just with themselves and kids, busting the myth that videogames are an isolating and unsocial experience for kids
· When asked about the increasing popularity of videogames:
o 56% don't mind as long as there is an educational or creative element in the games
o 20% aren't bothered by it
o 41% find it hard to monitor what games are most appropriate for children
o Only 5% were concerned about the increasing popularity
· The majority also think that playing videogames in moderation can:
o Improve motor skills and hand-eye coordination (94%)
o Improve analytical and problem solving skills (91%)
o Be a good creative and design outlet (72%)
· Although 50% of parents were divided on if videogames were a true social experience.