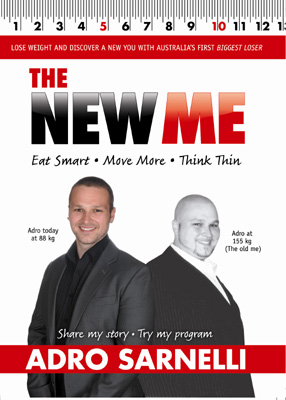 Share in and be inspired by Adro's personal weight loss journey... discover how he lost the weight so fast and how he keeps it off with his own weight loss program.

Since 2006, Adro Sarnelli - inaugural winner of The Biggest Loser - has lost an incredible 72kgs. Adro went on to fulfil his promise to help Australians lose weight and live his dream by developing his own weight loss retreat. In The New Me, Adro shares his secrets to losing weight - and keeping if off.

In telling his inspiring personal story - from life before TV celebrity to the present day - Adro shares the three basic principles of his formula for success:
Eat Smart
Move More
Think Thin

By following his simple, easy to understand plan, you too can create a whole 'new you'. Adro is an ordinary Aussie bloke, whose example proves that you can change your life, if you choose to.

Adro Sarnelli inspired millions of overweight Australians when he became the first winner of TV's primetime hit The Biggest Loser. He lost more than 60 kilograms in four months, sparking scepticism about his ability to keep it off after the show. Fast forward four years: not only has he lost a further 12kg, Adro lives a fit and fabulous life helping others to take control of their weight and their lives. His personal development and weight loss centre, The New Me Weight Loss Retreat in Victoria, has helped residents lose more than 1600kg combined! See the website for more details: www.thenewme.com.au

This personal and inspiring book is based on Adro's own weight loss journey - from schoolyard taunts to present day - and the program he now champions at his weight loss retreat.

Donna Jones is an experienced health writer and editor, whose books and journalism can be found on her website: www.donnajones.com.au

Was it hard to loose weight and be weighted in front of Australia, when you first participated in The Biggest Loser?

Adro Sarnelli: Well, I guess to be quite honest you weren't in front of the whole Australia. You have to get into your head that you were there doing a television show and you were only there with eleven other people that were also obese trying to loose weight and a bunch of people carrying black things on their shoulders who became your friends. It was not like it was done live and there was no audience. We also didn't actually get to see ourselves; it's not like when you make a home video and you look at it and think 'God I look like an idiot!' It was way too late till we saw how stupid we looked.


By the time it screens on television you have lost all that weight and you feel a lot better about yourselves anyway!

Adro Sarnelli: Absolutely! By the time we saw it, it was pretty much the week that I was going home, almost. By the time it was on I actually was already finished. What really catapulted me and set me up for it was I knew that by the time initial photos of me in a set of speedos (to be quite honest at that size it should be illegal) were shown to Australia that I was going to look totally different, and I did. When it all began coming out I was only just above 100 kilo, that was my push to know I was going to not be like that by the time Australia saw it.


How did you manage to keep the weight you lost, in the show, off?

Adro Sarnelli: For me I started a new life and my new life was healthier living, my new life was exercising. It was the first time in my life that I had been thin so I was bound to not allow myself to know anything other. I still till today don't eat certain foods, when I was going through my weight loss journey I declared to never go back to the fast food joints; I have not eaten KFC, McDonalds, Hungry Jacks or any of that stuff since the 10th of December 2005. I still can count on one hand a combination of the amount of bread, rice, pasta or potatoes that I have eaten. I was able to identify that those were the things I didn't want in my life anymore because I wanted to be thin, fit and healthy. I want to live this awesome and amazing life.


When did you begin writing this book?

Adro Sarnelli: To be quite honest, I guess I really began writing the book when I was born. I think for me, just after The Biggest Loser when I realised that I wanted to pay it forward. I am focused on putting that message out there and after I had realised I had done something rather significant, that people would defiantly be moved by, other than being on the program. When I was doing meet and greets, or when I would run into people at Subway, they were all saying 'I'd love to know more about your story' and 'we feel like we already know you but more would be great.

I started writing just after I finished The Biggest Loser and I got together with a co-writer a couple of years later and handed her all my material and say 'okay, here it is!'


Can you talk a little bit about the layout of the book, because it is more than a book, it is a hands-on-how-to guide.

Adro Sarnelli: The layout and the format is one of the most exciting parts about it, when we were chatting and going back and forth with the publishers, I said I wanted something that we going to be a little bit different, almost to the point of being dynamic. My biggest thing was I didn't want a book that they just read and then put into practice; I wanted a book that allowed them to become me. I feel that relate-ability that will something make the difference between my book and the next weight-loss book or the last weight loss book. People are able to read my book and read my first five or ten years and able to associate that back to their own lives, often they will say 'okay I had that issue' or 'okay I didn't have that issue, but I had this issue' and the book allows them to worth through it. Then the next five or ten years are the same. The purpose of the work book is to allow them to relate to my failures and my weight gain in conjunction with their weight gain. I also wanted them to relate to my successes.


What is your favourite snack?

Adro Sarnelli: For me, I try not to snack. Snacking is one of the things that I limit doing; when I have snacks I normally chose that time to have a protein shake. One of the biggest things that I did was realise that snacking was a bad thing for me and probably every person out there in the world. Therefore I identified that if I need a snack, I still need to eat in-between meals, I still need protein, so rather than skipping a meal why don't I have protein then.


Can you share with us a typical days exercise and food?

Adro Sarnelli: A typical day's food would probably be:
Breakfast: either an omelet done in the pan or in the oven like a frittata, I will use ham and eggs and egg white.
Morning Tea: would probably be a scope or two of my protein shake.
Lunch: will generally be chicken or fish and salad. Sometimes we do creative things at work for lunch and I really enjoy being versatile and doing sushi but using cauliflower instead of the rice. Or making burrito wraps and wrapping them in lettuce, instead of bread, that recipe is in the book, they are awesome. The burritos might even be for dinner.Afternoon Tea: tends to be a bit of a protein shake, I don't go crazy though, I allow myself three scopes of protein shake a day; one scope in the morning or two in the afternoon.

As for training, I still personal train two times a week; I have my trainer training me on a Tuesday and a Thursday. Tuesday and Thursday nights I do soccer training and then normally during the days we'll either take the dog for a walk in between work or I'll run a group class here at work, or sometimes I'll even go for a run or a bike ride.

I don't train every single day, because I don't feel that I need to, I train because I want too. I really enjoy exercising, I love being fit and active. I also like having fun whilst training, so I don't do weights too often, I do them often enough to continue to build up; I love running so I continue to run. I like challenging myself to the point that I still get frustrated. Everytime I start to run again I still take myself back to 'Adro you're fat, fat people don't run!' That is my first negative self talk, it is different now. Back then when I was fat and I didn't train I would say 'yes, that's right' and I would stop; now I think 'you're above this, you're better than this and I am going to fight through it'. The difference is now I still hear the same negative talk, I still hear it, and I just choose to not listen anymore.