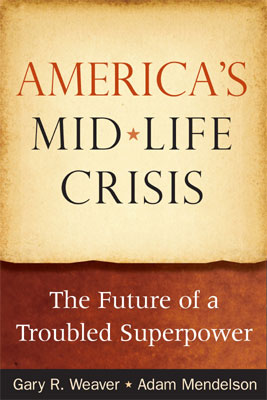 Examines the history and culture of America at a crucial point in its development.

Recently observers have noted a seismic shift, far beyond normal cyclic changes in culture and trends. Following 9/11, the United States -no longer confident in the protection of two vast oceans, a powerful military structure and a dominant economy - developed policies and practices that exclude foreigners and seem to violate basic civil rights guaranteed under the Constitution.

After decades of ebb and flow of isolationism and expansionism the US took a rigid new tack. Something had happened to the fundamental nature of American culture: a mid-life crisis.

To understand the nature of these times, America's Mid-Life Crisis examines the history, and more importantly, the culture of America at a crucial point in its development.

From the founding of the republic to the many conflicts over the years, from puritan roots to waves of immigration, from race to religion, from industry and innovation to influence on the world stage, America's Mid-Life Crisis captures the values, beliefs and behaviour of an increasingly complex society that is struggling to take its place in the new world order.

Gary Weaver is the founder and Executive Director of the Intercultural Management Institute (IMI) and for four decades has been a member of the School of International Service at American University, the largest school of international affairs in the country.