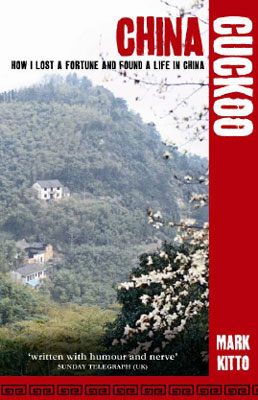 A world -wide hit, China Cuckoo is the true story of an eccentric Sinophile Englishman and his Chinese tree-change. In booming Shanghai in the 1990s, Mark Kitto hit the big time. As a publisher, he created the most successful English language magazines in China. But on the verge of signing a groundbreaking deal, it all came crashing down. The Communist Party stole his business. Variously accused of being a spy, a pornographer and a terrorist, Mark retreated to Moganshan, a beautiful and isolated mountain village once favoured as a summer retreat by Shanghais saints and sinners.

With Monganshans rundown European villas and abandonedtennis courts, the crumbling grandeur of a bygone era, Markfalls in love with the place. He decides to rent and restore one ofthe old houses. But this is not Tuscany or Provence. In a venturethat begins with a drunken banquet for local officials andcontinues with house fires, typhoons, gangsters, brothels and thefiner points of making bacon, Mark weaves through villagepolitics and bureaucratic farce to gain a foothold, livelihood andrespect on the mountain top.

Funny, fascinating and perceptive, China Cuckoo is about getting on with life in the most unlikelyof places. Its about the healing power of a small community even for an outsider. It is aboutrediscovering your passion despite what happens to you. It is, in the words of one who has sufferedand benefited from both, about the risks and rewards of going China Cuckoo.

Biography
Mark Kitto was a Captain in the Welsh Guards before he became a metalstrader in London and then China. He created a unique publishing empire but helost it all to the Communist Party. Mark now lives in Moganshan, a villagebuilt by missionaries in the early nineteenth century, with his Chinese wife andtwo children. The family runs a successful western-style cafe that is bringingforeigners back to the mountain retreat for the first time since the Communistscame in 1949.