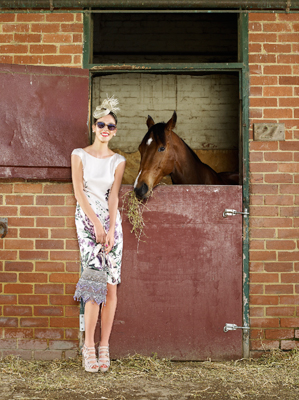 When the premiership is won and the footy final is done, there's only one thing that matters on the sporting and social agendas of most Melburnians: the Spring Racing Carnival. It is without a doubt our favourite string of springtime events and it kicks off at Caulfield Racecourse with the BMW Caulfield Cup Carnival.

A world-class boutique racecourse, situated just 10km from Melbourne CBD, Caulfield combines Group One racing with first-rate fashion and social events. Featuring a racetrack that is well within view no matter where you are at the course, members and general public alike can feel the horses thunder by as they race to the finish line.

Carnival Preview Day (17th September) and Sir Rupert Clarke Stakes Day (24th September) provide a sneak peak to the Carnival. The Age Caulfield Guineas Day (8th October) heralds the official beginning of the Carnival, Schweppes Thousand Guineas Day (Wednesday, 12th October) provides an ideal excuse for a mid week break and BMW Caulfield Cup Day (Saturday, 15th October) is when everything comes to a head, on and off the track.

Smart phone users will be pleased to know that an all-new Melbourne Racing Club App is available to keep users up to date with all the latest news of the BMW Caulfield Cup Carnival. The App features a personalised daily planner so users won't miss a minute of the action, live race results to keep the punters in the know including a 101 beginners guide to racing for all -first timers' and an interactive venue map. The App is available for download from your smart phone's App Store.

A myriad of fashion and social events will take place throughout the Carnival at the Fashion and Entertainment precinct, which will this year be located on the Fountain Lawn – just inside the main gate.

The Chadstone Fashion Stakes is the ultimate racing fashion competition, offering the best-dressed entrants a chance to share in the $70,000 prize pool. This year's Stakes is broken into three categories: Stylish Ladies (18 – 40 years), Stylish Ladies (40+ years) and Stylish Gentlemen (18 years and over). Registrations are now open at www.caulfieldcupcarnival.com.au

Emerging and established designers and retailers from across the country will showcase their classic race wear looks in the Caulfield Classic Style Award. Determined by a panel of expert judges, the winner will receive $25,000 to underwrite a marketing campaign for 2012, while the winner of the People's Choice Award will take home $5,000. Both will be announced on BMW Caulfield Cup Day.

A live performance by Sneaky Sound System will cap off an epic day on The Age Caulfield Guineas Day – performing on the Fashion and Entertainment Stage after the last race, we know we'll be sticking around!

And that's not where the fun stops. This year, a double storey marquee in the new Black Caviar Pavilion will be open to all patrons, as will the Cruiser Big Top – a new -circus' style marquee, that will play host to DJs, performers and numerous food and beverage outlets. An all-new Lady Luck Boulevard will be located in the Heath Enclosure, providing the ultimate racing experience.

Tickets for all this and more are on sale now at www.caulfieldcupcarnival.com.au

BMW Caulfield Cup Carnival Ambassador Giaan Rooney and the Face of Caulfield, Bree Laughlin, will keep us all up to date and entertained in the lead up to and throughout the Carnival, with webisodes, a blog, Facebook and tweets.

Friday 7th October – The Age Caulfield Ladies Luncheon
Held at Zinc in Federation Square, the ladies of Melbourne will be well entertained with a performance by James Reyne and a panel of A-grade racing and fashion stars.

Saturday 8th October – The Age Caulfield Guineas Day
Heart rates will rise as the finest hooves in the country thunder to the finish line in the three Group One races, including Australia's greatest stallion making race, the $1 million dollar The Age Caulfield Guineas. The world's greatest sprinter, Black Caviar, is also likely to make her first Spring Carnival appearance in the $201,000 Group 2 Schweppes Schillaci Stakes (1,000m).
At the Fashion & Entertainment precinct, heats for all three categories of the Chadstone Fashion Stakes will be held, as will the Grand Final of the Stylish Ladies (40+ years) and Stylish Gentlemen (18+ years) and a Daily Final for Stylish Ladies (18 – 40 years). Bringing a huge day of racing and entertainment to a grand finale, the world renowned dance group Sneaky Sound System play a free concert after the final race.
For the public, the new Black Caviar Pavilion will be launched incorporating a new double storey marquee. The -Cruiser Big Top' – a new -circus' style marquee, will play host to DJs, performers and numerous food and beverage outlets located in the Guineas car park area behind the exclusive Heath Enclosure.

Saturday, 15th October – BMW Caulfield Cup Day
Fortunes are won and legends are born in the richest handicap race in the world over 2,400m, the $2.65 million BMW Caulfield Cup.
Designers and retailers will go head to head in the Caulfield Classic Style Award – the overall winner will be awarded $25,000 and the winner of the People's Choice Award will take home $5,000. The Grand Final of the Chadstone Fashion Stakes (Stylish Ladies 18 – 40 years) will determine who takes home the ultimate prize, while members will vie for the coveted -Best Dressed' member's award.

Carnival Preview Day – Saturday 17th September
A -scene-setter' of the highest order! The first day of the BMW Caulfield Cup Carnival plays host to the first Group One race of the season, the Group One Hyland Race Colours Underwood Stakes, and launches the next five outstanding meetings over four weeks at Caulfield, culminating in the 2011 BMW Caulfield Cup.
The Group One $352,000 Hyland Race Colours Underwood Stakes is a race steeped in tradition and boasts an honour roll of champions including Octagonal, Northerly, El Segundo, Weekend Hussler and the reigning victor is now the world-acclaimed superstar, So You Think.
Another highlight on this program will be the Schweppes Thousand Guineas Prelude, the major preliminary leading into the biggest fillies race of the Carnival, the Group One Schweppes Thousand Guineas on the Wednesday of -Cup Week'.

The Age Caulfield Guineas Day – Saturday 8th October
Widely regarded as one of Australia's finest race days, The Age Caulfield Guineas Day is a triple Group One treat.
The Age Caulfield Guineas is a classic race for three-year-olds over the Caulfield mile and is renowned for being a stallion-making race. Champions of eras past have catapulted themselves into breeding immortality by winning this great race including Manikato, Vain and Redoute's Choice.
A highlight on the Australian racing calendar, -Guineas Day' includes the Group One $402,000 New Zealand Bloodstock Caulfield Stakes and the Group One $352,000 David Jones Toorak Handicap.
The Age Caulfield Guineas has provided some of Australian racing's most memorable moments including Redoute's Choice and Testa Rossa in 1999, God's Own miraculous victory in 2005 and the champ, Weekend Hussler's blistering performance to win in 2007.
The state's leading trainer Peter Moody and connections are yet to confirm a spring programme for Black Caviar, however the $201,000 Group Two WFA Schweppes Schillaci Stakes (1000m) at Caulfield on October 8TH is a possible first-up target for the equine turf idol.

BMW Caulfield Cup Day – Saturday 15th October
Renowned for being the toughest and most testing 2,400m handicap race in the world, the Group One $2.65 million BMW Caulfield Cup is also the richest and is the jewel in the crown of the Melbourne Racing Club's biggest week of racing.
History will say that -Cups King' Bart Cummings won his seventh Caulfield Cup in 2009 with Viewed and the -First Lady of Racing', Gai Waterhouse won her first twelve months ago with Descarado. Champion jockey Damien Oliver has four Cups on his mantle piece which is only bettered by one man, the great Scobie Breasley who has won five Cups which clearly defines the BMW Caulfield Cup as a race that is won by racing royalty.
Celebrating its 134th birthday in 2011, the question remains as to will join this illustrious group as a champion of this great race.

Their designs were revealed at last night's Gala Launch of the BMW Caulfield Cup Carnival. 'It's inspiring to see what brilliant designs are entered in the Award," MRC Events Manager Fiona Twist says. 'This year's entries are stunning and prove that we needn't look to international designers for our race wear."

The winner will be determined by a panel of fashion industry experts, who will judge entrants according to set criteria including: the overall outfit, its suitability for the races, seasonal attention, innovation and of course their interpretation of classic style. The winner will be awarded $25,000 that must be used to underwrite a 2012 marketing activity.

Last year's winner Yeojin Bae used the prize money to set up a media suite in LA, enabling her to introduce her label to stylists and editors in America. 'It's an opportunity I would not have otherwise had," she says.

Members of the public are invited to vote for their favourite in the People's Choice Award at caulfieldcupcarnival.com.au. Voting will be open until Thursday, 13TH October 2011. The -favourite' designer will receive $5,000. All members of the public who vote will go into the draw to win a -Caulfield Cup Experience' worth over $4,000.

Entries will be paraded at the Trackside Fashion Luncheon (Wednesday, 12th October – member's only) and at BMW Caulfield Cup Day (Saturday, 15th October 2011), where the overall winner and the People's Choice will be announced.

A regular on the racing circuit, Giaan exemplifies true spring racing style. Her natural beauty, polished appearance, professional experience and brilliant smile make her the perfect choice for Fashion and Social Ambassador at this year's Carnival.

As Ambassador, she will host and co-host events; interview racegoers, fashion designers, jockeys and Melbourne personalities; and be available for interviews on all things spring racing. She will be the glamour girl of the Carnival, and will front photo shoots and media events.

'I'm thrilled to represent the Melbourne Racing Club," Giaan said. 'I love the races and I'm excited about the prospect of being involved in the lead-up to and throughout the carnival."
At the age of 15, Giaan won a gold medal in the 100m backstroke at the 1998 Commonwealth Games before winning two silver medals at the 2000 Sydney Olympics. In 2004, as lead swimmer in the 4x100m medley, she won a gold medal at the Athens Olympics – her proudest achievement.

Giaan joined Channel Nine in 2006 and has become a familiar face to viewers around Australia. She hosts Nine's Victorian travel and lifestyle program Postcards, co-hosts Wide World of Sports and is a regular presenter on Getaway. She has also been a presenter for What's Good For You, the FINA World Swimming Championships, Battlefronts, and the weather on the Today show.

With a broad knowledge of sport, a passion for Melbourne and a quintessential classic style, Giaan will bring us the best of fashion and racing leading up to and throughout the 2011 BMW Caulfield Cup Carnival.