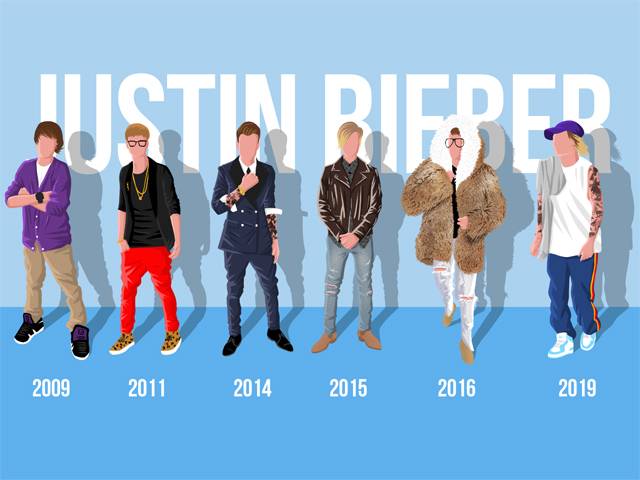 A Trip Through Time: The Most Outrageous Celebrity Style Evolutions

Celebrity outfits can influence high street trends, there's no doubt about it. However, there are some trends that not even superfans are willing to follow.

Taking six of the world's most talked-about celebrities, we've rounded up the outfits that made them the most headlines and sent the world of fashion into a frenzy.

Kanye West
2004 - Kanye West revealed his love for soft toys, with one teddy bear stealing his heart. He featured the Ralph Lauren Polo Bear on the cover of his College Dropout album and was captured wearing Polo Bear knitwear on more than four occasions that year. The bear soon became a star, with Drake and John Mayer also following the teddy bear trend.
2006 - Making his way into the spotlight, Kanye's outfits began to steal the show. At the 2006 Grammy Awards he took home the glory in an eccentric dusty-pink, white satin-lapelled tux teamed with white driving gloves and sneakers.
2007 - Remember the shutter shades? We have Kanye to thank for this unforgettable fashion trend. Designer, Alain Mikli, designed a custom pair for Kanye, who wore them in the music video for hit single "Stronger".
2009 - Kanye appeared on PETA'S worst offenders list in 2009. We can understand why, after seeing this massive fur coat matching with Amber Rose at the Louis Vuitton show during Paris Fashion Week.
2013 - Kanye West was barely recognisable in a bizarre crystal balaclava whilst performing on stage during his 2013 Yeezus tour. French fashion house, Maison Martin Margiela, designed the piece as part of a collection exclusively for Kanye. 2017 - Kanye was first spotted with a vibrant new hair colour after alleged reports of splitting with wife, Kim Kardashian. Dying his hair pink and blonde, he wore an oversized sheepskin coat, camouflage combat trousers and military boots as he left the Arclight Cinema in Hollywood.
2019 - After years of outrageous outfits, Kanye has finally hit the style jackpot. With his Yeezy venture now worth over £1 Billion, Kanye is the king of contemporary fashion, with music being a key influence on his designs.

Miley Cyrus
2007 - Back when Miley was best known for starring as 'Hannah Montana' her outfits were pink, glitzy and packed with girl-power. A recent 2019 auction saw some of the character's most iconic outfits sold for more than $5,000, with fans still keen to get a piece of Miley's Disney Star days.
2009- At the 2019 Oscar's, Miley looked elegant in her silver Mermaid gown designed by Zuhair Murhad. She was hailed as one of the best dressed actresses at the awards gala, with her dress reportedly inspired by The Little Mermaid.
2012 - At 2012 Billboard Music Awards, Miley revealed her cheeky side when she wore an oversized Jean Paul Gaultier blazer - with no knickers! From here, things got even more risqué, from see-through skirts to side boob, the star began to sex up her image.
2013 - In 2013, she came in like a wrecking ball and caused destruction on the style scene. Completely naked in the music video, and keen to shake off her pop princess past, the singer baited controversy at every turn.
2015 - The star hosted the 2015 MTV Video Music Awards, wearing 11 outfits in just one night. In true Miley style she arrived on the red carpet with a BANG! In this near-naked spangly ensemble teamed with silver thigh high boots she left very little to the imagination.
2017- After a run of raunchy outfits and a reputation for rebellion, Miley shocked us again at the 2017 billboard awards, keeping it casual in white denim shorts, cowboy hat and boots. Going back to her country routes, she wore the outfit to coincide with the theme of her single 'Malibu'.
2019 - Miley strutted the Grammys red carpet wearing a stunningly sophisticated black suit designed by Mugler. While the black blazer Miley donned may suggest she's calmed down a little, think again, as she wore no shirt or bra under the blazer.

Justin Bieber
2009 - Back when Bieber was just a baby, he made one of his first public appearances at the Nintendo World Store in New York City. Sporting a preppy purple cardigan and his iconic bowl cut hairstyle, the 15-year-old singer was set to release his debut single 'Baby'.
2011 - In one of his first forays into patterned clothing, Bieber paired his black blazer, gold jewellery, and bright red pants with bold cheetah-print shoes at the 2011 MTV Video Music Awards.
2014 - After a huge run of successful singles, Bieber took the chop and revealed a mature new look. Pairing an arm of new tattoos with a sleek monochrome suit at amfAR's 21st Cinema Against AIDS Gala, Bieber looked cool, stylish and confident.
2015 - First appearing at the 2015 VMA Awards rocking a punk inspired hairstyle, Bieber began to incorporate a 'rough and ready' look. The leather jacket, skinny jeans and moody expression were bang on trend at this time.
2016 - Stepping out in an OTT fur jacket with throwback, hip-hop vibes, the star began to refine his look with staples from Balmain, Calvin Klein Collection, and Saint Laurent.
2019 - Now married to Hayley Baldwin, Bieber's style has taken a backseat. Recently labelled a' Scumbro' by Vanity Fair, this new trend involves taking a sloppy approach to wearing expensive, designer clothing.

David Beckham
1998 - Golden Balls got in a spot of bother during the 1998 World Cup, resulting in a red card for reportedly kicking Argentian player, Diego Simeone. But was that his worst offence? In the same year, he was papped with new wife Victoria wearing a sarong he took from her wardrobe, teaming with a black tank top and sandals.
2000 - David and Victoria Beckham wore matching leather outfits at the Midland Hotel in Manchester for their Millennium New Year's Eve party, and they certainly set off fireworks. The Versace two-piece made major headlines, with the couple knighted as style royalty during this time.
2003 - Teaming his Ecko Unlted tracksuit with an impressive set of corn rows, Becks ditched the leather in favour of some serious urban street style. The US brand Ecko Unltd, favoured by celebrities, was huge in the early 00's before going into liquidation in 2014.
2006 - Another year another hairstyle, not to mention a wardrobe refresh. Beckham dyed his hair platinum blonde and rekindled his love for leather as he teamed leather jackets with 80's washed denim and tight fitted tees.
2008 - Welcome to the year of the waistcoat. Pairing the formal garm with casual denim was a huge trend in 2008, and Beckham was the leader of the pack. He wore a classic combination at the Nickelodeon Teen Choice Awards.
2012 - Making headlines for his move to Paris St-Germain, Becks image reflected his London routes. Papped in the fashion capital, he wore a longline tailored jacket, flat cap and Chelsea boots.
2019 - Spotted in London earlier this year, Victoria's fashion expertise has clearly impacted Becks style. Here he combines staple items to create a simple yet chic look, reflecting the style of VB designs.

Madonna
1985 - This look, here seen on set for the film Desperately Seeking Susan, has undoubtedly become Madonna's most-recreated signature look. We fully owe new-wave punk style, huge hair bows, fishnets and tutus to her.
1990 - The cone-shaped Jean-Paul Gaultier bustier that Madonna rocked on her Blonde Ambition tour has become one of her most memorable looks to date. In 2012 it was auctioned for £48,000 at Christies.
1998 - Madonna caused major controversy with her second VH1 Fashion Awards outfit -- a traditional royal-blue sari that referenced her growing interest in Eastern cultures and religions.
2005 - At the MTV Europe Music Awards in Lisbon, Madonna revealed her new 'Hung Up' disco phase in a purple bomber jacket and matching purple boots.
2009 - Styled by Marc Jacobs himself, Madonna rocked a Louis Vuitton autumn/winter 2009-10 blue dress, over-the-knee boots and custom haute couture bunny ears at the Costume Institute Gala in 2009. Though many considered her one of the event's worst-dressed at the time, it was a look that made headlines across the world.
2013 - The Met Gala 2013 theme was practically made for Madonna: Punk: Chaos to Couture. She paid tribute to her '80s style in an embellished Givenchy plaid jacket paired with excessive jewellery and fish nets.
2019 - Still in the media spotlight, this year Madonna has taken on a whole new persona. She recently revealed 'Madame X' is a spy, a secret agent, and sleeps with one eye open - which explains the mystery behind the eyepatch she's been sporting.