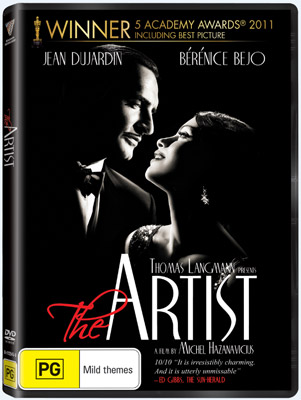 Set during the twilight of Hollywood's silent era and shot on location in Los Angeles, The Artist tells the story of a charismatic movie star unhappily confronting the new world of talking pictures. Mixing comedy, romance and melodrama, The Artist is itself an example of the form it celebrates: a black-and-white silent film that relies on images, actors and music to weave its singular spell.

Special Features:
The Artisans behind The Artist:
Production Design
Cinematography
Costumes
Music
Hollywood as a Character: The Locations of The Artist
Blooper Reel

Exclusive Extra Special Features to Blu-ray:
The Artist: The Making of An American Romance
Q&A With the Filmakers and Cast

Review: What a fantastic film. Fall in love with the art of film making, and understand true story telling at it's finest.