The Vow & how Aussies feel about relationships Inspired by a true story, The Vow is the tale of a love that refuses to be forgotten. The second film from up-and-coming director, Michael Sucsy, The Vow boasts and all-star cast including Rachel McAdams and Channing Tatum and is 2012's ultimate 'love story'.

Leo (Channing Tatum) is devasted when a car accident plunges his wife Paige (Rachel McAdams) into a deep coma. She miraculously recovers - but the last five years of her memory has vanished. Suddenly Leo finds himself married to a stranger who can't remember anything about him.

Naively, Paige falls back under the influence of her controlling parents (Sam Neill and Jessica Lange) and reconnects with her ex-fiance (Scott Speedman). Desperately, Leo tries to recreate the moments that shaped their romance, but can he rekindle the passion before he loses his soul mate forever?

The Vow is the emotional journey of how far one man will go to recreate the love he and his wife once shared. Full on bonus features, including deleted scenes and director's commentary, The Vow is this year's must-own romantic drama, available on Blu-ray and DVD from June 13, 2012. 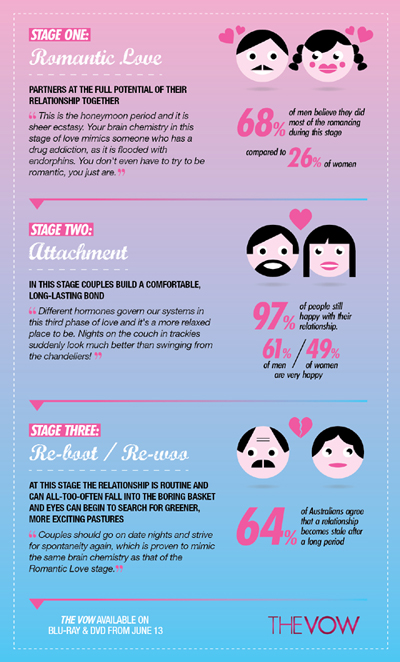 New research uncovers how men and women really feel about their relationships and explores whether true love really exists, or is it just something we see in movies?

New research released by Universal Sony Pictures Home Entertainment, commissioned to support Blu-ray and DVD release of romantic comedy The Vow (based on real events),reveals the true feelings of Australians when it comes to romance and relationships. If given the chance would you leave, re-do or re-woo?

In the film, we see the lead character having to re-woo his wife after she sustains amnesia and can't remember their relationship, the ultimate display of true love. And while of those surveyed, 88% of Australians would similarly re-woo their partner if in the same situation; two million Australians would take the opportunity to simply leave the relationship.

While there is no exact science to finding and maintaining love, one of Australia's leading relationship experts, Emma Merkas believes that all relationships experience 'life stages' and our feelings towards our partner, and whether we decide to stay or leave the relationship are influenced by different factors at each stage.

According to Merkas this evaluation process - stay, leave, redo - is common as couples move through the three life stages of a relationship, which she describes as:
1. Romantic Love
2. Attachment
3. Re-boot/Re-woo

Merkas explains, "It's interesting to look at how the statistics relating to happiness and the notions of leave, redo or re-woo change according to which life stage the relationship is at. It also differs between men and women. What's common across the board however, and no real surprise, is that 97% of Australians agree all relationships require a constant level of effort and 'wooing' to keep things alive and exciting."

Stage One: Romantic Love
Merkas explains, "we call this stage the honeymoon period and it is literally sheer ecstasy. Your brain chemistry in this stage of love mimics someone who has a drug addiction, as it is flooded with endorphins. You don't even have to try to be romantic, you just are. It's easy to woo each other when we're in the Romantic Love phase of the relationship. It's no wonder 74% of us want to go back there!"

The Romantic Love stage is designed to show partners the full potential of their relationship together - they can do no wrong, they want to be around each other all the time and there is a heightened sense of spontaneity. Of those surveyed, 68% of men believe they did most of the romancing during this stage, compared to 26% of woman.

According to Merkas, "after all these years of evolution, we're still hardwired by our DNA. Men still do most the wooing and women are still the ones that can't get enough of it - this doesn't look set to change anytime soon and quite honestly, men usually enjoy the challenge of chasing.

"The Romantic Love period is short-lived and couples must soon decide to leave, stay or redo their first stages of love."

Stage Two: Attachment
The strongest relationships move to the Attachment stage, where couples build comfortable and long-lasting bonds. Emma explains, "different hormones govern our systems in this phase of love and it's a more relaxed place to be. Nights on the couch in trackies suddenly look much better than swinging from the chandeliers!"

The danger here is that couples fall so firmly into their comfortable rut that 53% of those surveyed believe their partner takes them for granted and they both no longer try hard to be romantic. However on average, 97% of people in this stage are still happy with their relationships and are less likely to leave their partner.

Interestingly, during this phase the happiness factor differs between men and women with 61% of males more likely to be very happy compared to only 49% of females. Merkas explains, "this isn't a surprise, with women being the ones having the highest expectations about romance and wooing. It seems that all of us, but particularly the men, need to step up and put a little more effort into rekindling the romance with their partners to keep them happy and to show they aren't taking them for granted."

Stage Three: Re-boot/Re-woo
At this stage the relationship is routine and can all-to-often fall into the boring basket and eyes can begin to search for greener, more exciting pastures.

Approximately 64% of Australians agree that a relationship becomes stale after a long period of time and one in three (31%) of those surveyed are jealous of the romance in their friends' relationships.

An extension of the Attachment phase, the Re-boot or Re-woo phase is a chance for couples to do new things together to spike levels of dopamine to keep the love alive. Merkas recommends date nights and striving for spontaneity again, which is proven to mimic the same brain chemistry as that of the Romantic Love stage.

Merkas offers some advice; "What everyone needs to remember is that we tend to only see the surface of other people's relationships. You're much more likely to put a status update on Facebook showing the two dozen roses your husband just sent you for your birthday rather than one about the all-out, plate-throwing fight you just had over whose turn it is to do the dishes.

"The Internet has made it easy to edit your life to show only the best bits, but don't be sucked in. Even the greatest couples around you have their bad days too!"

A final word from the expert; "whether true love exists in real life as it does in the movies is up for interpretation. Every relationship is different and like most things you only get out what you put in.

"Before deciding to discard a relationship, regardless of what stage you're at, considering what made you happy in the first place is important. As Leo does in The Vow, I'm all for a re-woo and would call on all Australian's to step up and re-woo their partners; women and men included.

"Love can be hard work but there is no reason to be jealous of others' relationships when you have the ability to inject romance into your own every day, instead of just sitting around waiting for it to happen or just accepting the hand you're dealt."

About the survey: The study was conducted among 1,025 Australians aged 18 years and over. Surveys were distributed throughout Australia including both capital city and non-capital city areas. Fieldwork commenced on Tuesday, April 24th and was completed on Monday, April 30th, 2012. This study was conducted online amongst members of a permission-based panel. A screening question was included to ensure all respondents were currently in a relationship. After interviewing, data was weighted to the latest population estimates sourced from the Australian Bureau of Statistics.