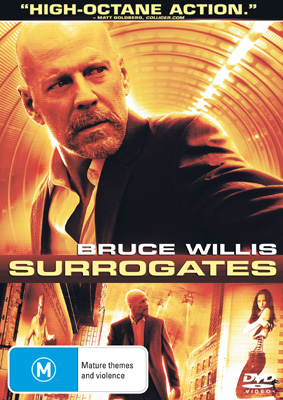 Bruce Willis is a targeted man in the futuristic thriller Surrogates, released to DVD and Blu-ray/DVD Combo Pack 3 March 2010!

FBI Agent Tom Greer, played by action star BRUCE WILLIS, risks it all in pursuit of a killer loose in a world where everyone lives their day-to-day lives vicariously through their surrogate robots. Don't miss this action-packed science fiction thriller, SURROGATES, released to DVD and in the Blu-ray and DVD Combo Pack, 3 March 2010.

SURROGATES is set in the futuristic world of 2017, where people live out their lives from home through the use of life-like remote controlled physically perfect replica's of themselves. In this strange and isolating world, it has meant the creation of a life without fear, pain or crime. But the first murder in years has now shaken the safety of this world to the core.

FBI agent Tom Geer is assigned to the investigation, and given the victim Jarod Canter is the son of Dr Lionel Canter (JAMES CROMWELL), the inventor of surrogates, suspicions of the motive are mounting. But what is even more troubling for Greer, is that Canter's unexplainable death occurred alongside the murder of several police officers.

Greer and his partner Jennifer (RADHA MITCHELL) are soon led in their investigation to an organisation known as The Dreads; a group devoted to the destruction of surrogates, and their leader The Prophet (VING RHAMES). But while chasing a suspect, Greer is hurt by the same device that killed Canter known as an O.D. (Overload Device). Discovered by his wife in his home, Greer is lucky to survive but his surrogate is permanently damaged.

Greer must now continue the investigation without the use of his surrogate, a strange and unsettling experience after years of shelter from the outside world.

Soon after, the investigation takes another twist with the discovery that the O.D. was originally designed by the military. But with the weapon still out there, the path to truth becomes more complex and dangerous for Greer as he is lead back towards Dr Canter in his pursuit of the truth.

With the lives of all users of surrogates dangerously at stake, Greer uncovers a shocking conspiracy that will have you on the edge of your seat right up to the final climax.

With a brilliant hard-edged performance by BRUCE WILLIS, and in tune with the classic science fiction genre established by Philip K. Dick with Do Androids Dream of Electric Sheep, SURROGATES is an action packed DVD not to be missed this summer.

In addition to director commentary, SURROGATES also includes the spectacular, special music video, 'I Will Not Bow', by American rock band Breaking Benjamin.

Don't miss your chance to own SURROGATES - available on DVD and in the Combo Pack*, 3 March 2010 - undoubtedly a classic science fiction thriller to collect!

* Combo pack contains a Blu-ray Disc plus a DVD copy of the film in a single package.