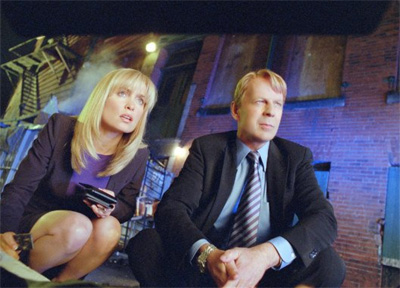 Looking very glamorous, Australian actress Radha Mitchell has managed to avoid even the mere mention of a personal life, even throughout the ten years since the beautiful actress was noticed in the Australian film Love and other Catastrophes Radha Mitchell has managed to avoid dealing with the kind of tabloid intrusiveness into her personal life that often plagued her contemporaries, laughingly referring to herself as 'a blank slate', she says, laughingly, while we sit in a Beverly Hills hotel room discussing her big-budget Hollywood film Surrogates.

"I guess I'm quite private, and I don't really want to talk about things that I'm in the process of, or figuring out, or things that I am in," the actress explains. "I can only say that I was in Australia recently, and just being around people that I know who love me, it's a very different experience to being sort of in a work city, which is sort of - nanananana. So those kinds of things, of course, you discuss with your friends, but not necessarily in an interview situation," Radha Mitchell adds laughingly. 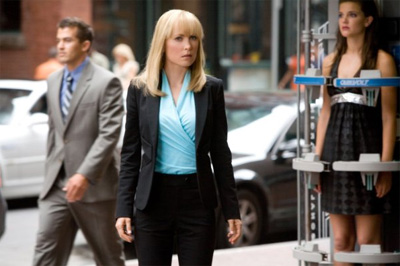 Though she frequently travels to Australia, she calls Los Angeles home, residing in the coastal city of Santa Monica. "I I'm still trying to pay off my mortgage," she says, which may explain her decision to deviate from the smaller films to which she is usually drawn, to a big-budget Disney blockbuster starring heavyweight star Bruce Willis. "I guess it meant the opportunity to work in a film with a budget of $100 million is always interesting," she explains, not to mention the chance "to work with someone like Bruce Willis, who's sort of known for his prowess in the action genre, which is also kind of exciting."

The Jonathan Mostow-directed futuristic thriller stars Willis as an FBI agent who enlists the aid of his own surrogate to investigate the murder of the genius college student who invented the surrogates. As the case grows more complicated, however, the withdrawn detective discovers that in order to actually catch the killer he will have to venture outside the safety of his own home for the first time in many years, and enlists the aid of another agent (Radha Mitchell) in tracking his target down. "I thought the script itself is a very interesting conceit, the idea of, what is a surrogate reality and how does it sort of reflect on the society that we currently live in? What are the choices that we're making? All of those sort of issues are sort of there, implanted in the script, and I think that's what attracted me to it," Radha Mitchell further explains. 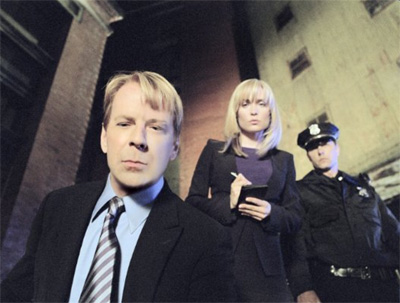 One of the challenging facets of this film is that it afforded the actress the chance to play two versions of her FBI agent character: the beautiful, perfect surrogate and her more dowdy real self. "It's great to be able to change your costume in one story, and have these two different identities, but what I guess the story really gets at is the abstraction of social interaction and I guess also the obsession with perfection. So there are the robots that are all supposed to have this particular aesthetic look that I guess currently we would consider better than the other look, but if you can change your costume like that, you lose the bias, and then you go for comfort. I had a padded ass in the second costume, and, like, buckteeth, but ultimately when you can wear high heels, or you can sit around in a padded ass? So you can do either or by choice and you choose the ass. Then there's the idea that you could change your gender, and you could change your race, so what is intrinsic to who we are? We feel like it's this sort of physical thing, but maybe we are just these creatures of the mind."

Surrogates also comments on the dangers and misuses of technology. Radha Mitchell is not on Twitter on Facebook, but she says she is not technologically phobic in her own life. "I'm not phobic of technology. I think it can certainly deliver us, give us more time and shift our sense of identity in a positive way. I think what the story kind of directs our attention towards is that we are physical entities and as much as we are emotional entities, as much as we are intellectual entities, and we can't lose that, because it's kind of a basic human trait, that we need to engage in the physical world. That's really essential to who we are." Asked what surprised her about working with his superstar co-star, Radha Mitchell says "Everything about him is quite surprising. He's certainly got a lot of power on set, so it was interesting to sort of act in scenes in that dynamic. But what I always like about the roles that he plays, is that he brings this sort of self-deprecating humor, and yet he's kind of got this sort of macho pride. He's sort of fun, you enjoy him and in person, he has those qualities as well." 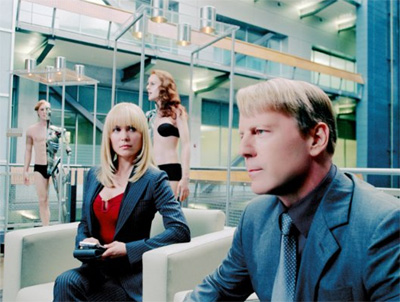 While a film like Surrogates has financial benefits, she was glad to play a different role in the new Australian film, The Waiting City, on which she serves as producer. The film will have its world premiere at this year's Toronto Film Festival. Asked if working in India helped to keep her grounded, Radha Mitchell pauses. "You would like to say 'Yes,' but no, because you feel kind of like a fish out of water and that's what's great about India. It's such a shocking shift, that you are very much just in the moment. I mean, we were acting with kids that were living on the street, and it was a very low-budget film, so one of my make-up artists had HIV and he couldn't tell anybody, because if he did he'd never work again, and he was living in this tiny apartment, plus he had a wife who also had HIV."

Radha Mitchell describes the experience as being "pretty intense, but sort of what people have to live with and the kid we were working with lives on the streets and that was his life. I mean, he had family, but that was how they all grew up, so how do you feel about staying in a five-star hotel, when people you're working with live like that, but at the same time, you've got to make the movie, and you've got to be healthy, because you get very sick. I've been to India many times, but it was very intense."

From such abject poverty, Radha Mitchell also completed the horror film The Crazies. "where I had the opportunity to scream and yell in the face of George Romero's crazy zombies,which I think is also going to be a pretty good film. It was actually quite cathartic after having a sort of uptight kind of character before that," she says laughingly. Is she a good screamer? "I am, actually, as I discovered. Yes, it's kind of primal, and then afterwards, you feel kind of light. You should try it some time."

SURROGATES OPENS IN NORTH AMERICA ON SEPTEMBER 25 AND OTHER COUNTRIES SHORTLY THEREAFTER. 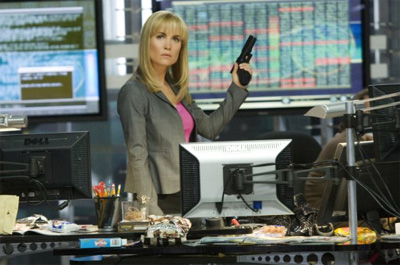 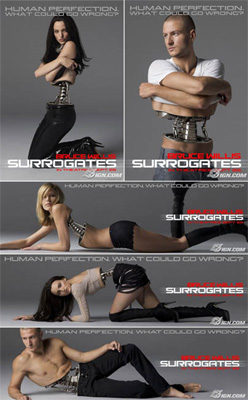 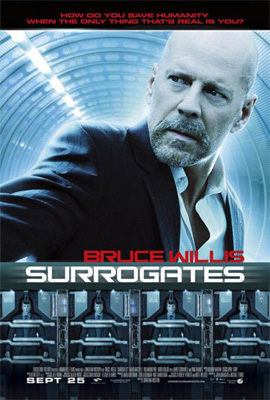 FBI agents (BRUCE WILLIS and RADHA MITCHELL) investigate the mysterious murder of a college student linked to the man who helped create a high-tech surrogate phenomenon that allows people to purchase unflawed robotic versions of themselves - fit, good looking remotely controlled machines that ultimately assume their life roles - enabling people to experience life vicariously from the comfort and safety of their own homes. The murder spawns a quest for answers: in a world of masks, whos real and who can you trust?