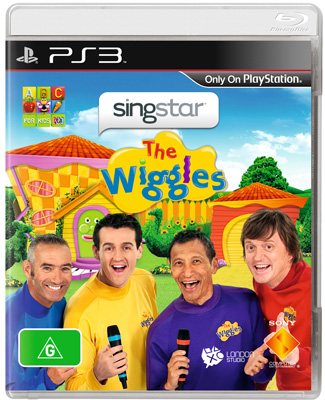 Get a Wiggle on!
Sony Computer Entertainment Australia (SCE Aust.) today confirmed that SingStar® The Wiggles game for PlayStation®3 (PS3™) will launch in stores across Australia and New Zealand on this Thursday, 25th November. This follows on from the PlayStation®2 (PS2™) title launch earlier this year.

In time for the 2010 festive season, SingStar The Wiggles has been designed with a child friendly game interface that will provide an interactive and fun experience in homes across the region. The title has 26 of the most popular tracks from The Wiggles, such as `Hot Potato' and `Wake up Jeff!' and features Anthony Field, Jeff Fatt, Sam Moran, Murray Cook, together with children's favourites Dorothy the Dinosaur and Captain Feathersword.

"SingStar The Wiggles offers fans an interactive and rewarding experience as children get ready to entertain and have fun with their family this festive season," said Patrick Lagana, Marketing Manager, Sony Computer Entertainment Australia.

Anthony Field, Blue Wiggle, said, "We're excited that children of all ages can sing along to our songs from over the years. I've had a go at the game and my children love being able to hold a microphone and sing along to the songs they know so well."

Both The Wiggles and SingStar are success stories in their own right. The Wiggles over their 19 year career have sold over 23 million DVDs and 7 million CDs worldwide gaining fame from their music, television shows and DVD releases. They are broadcast in nearly 150 countries, have received 17 Gold, 12 Platinum, 3 Double Platinum and 10 Multi-Platinum awards for their videos and music, have won 9 ARIA awards for Best Children's Album and 4 APRA Song Awards for Best Children's Song. The group was further recognised as UNICEF Goodwill Ambassadors in 2008 and were awarded in 2010 the Order of Australia for their services to children's entertainment and the arts.

Since its launch in 2004, SingStar has become one of the world's popular game titles. The game lets you sing to your favourite artists along with their actual videos; and rates you on pitch, tone and rhythm. In Australia and New Zealand alone the SingStar games have been a massive success; with over 3 million disc titles sold on PS2 and PS3 to date, more than 1 million microphones in homes across the region and more than half a million tracks downloaded through the online service SingStore™.

Arriving just in time for the holiday season, SingStar The Wiggles will bring families together, as parents and children sing along to their favourite songs which include:
1. Hot Potato
2. Can You (Point Your Fingers And Do The Twist?)
3. Fruit Salad
4. Rock-A-Bye Your Bear
5. Toot Toot, Chugga Chugga, Big Red Car
6. Wake Up Jeff!
7. Captain Feathersword Fell Asleep On His Pirate Ship (Quack Quack)
8. The Monkey Dance
9. Get Ready To Wiggle
10. Move Your Arms Like Henry
11. Lights, Camera, Action, Wiggles!
12. Play Your Guitar With Murray
13. To Have A Tea Party
14. Getting Strong!
15. Twinkle, Twinkle Little Star
16. I'm Dorothy the Dinosaur
17. Dr Knickerbocker
18. The Shimmie Shake!
19. Wags The Dog Is Chasing His Tail
20. Hot Poppin' Popcorn

PLUS, the following tracks are exclusive to the PlayStation 3 version:
21. Wiggle Bay
22. Dorothy (Would You Like To Dance?)
23. Ooh It's Captain Feathersword
24. Go Santa Go
25. Here Come The Chicken
26. Over In The Meadow 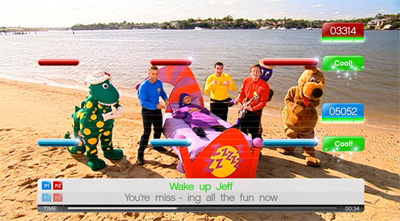