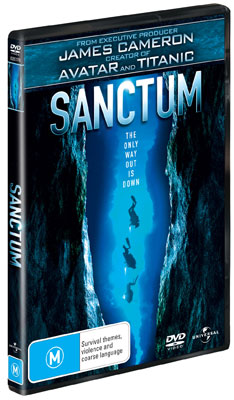 The epic adventure Sanctum, from three-time Academy Award® winning executive producer James Cameron (Avatar, Titanic) follows a team of cave divers on a treacherous expedition to the largest, most beautiful and least accessible cave systems on Earth. Sanctum is a thrilling action adventure experience unlike any other.

Master diver Frank McGuire (Richard Roxburgh) has explored the South Pacific's Esa'ala caves for months,, but when his exit is cut off in a flash flood, Frank's key team including his teenage son Josh (Rhys Wakefield) and financier Carl Hurley (Ioan Gruffudd) are forced to radically alter their plans.

The team is forced deeper into the cave system where they must fight raging water, deadly terrain and their own sense of panic as they search the underwater labyrinth for an escape route to the sea. With dwindling supplies, the crew is confronted with the unavoidable question: Can they survive, or will they be trapped forever?

Sanctum is a fast paced, edge of your seat action adventure from the team that brought you Titanic and Avatar. Also releasing on the 3D home entertainment Blu-ray platform, experience the vast and beautiful caverns in all their glory thanks to James Cameron's unique camera technology. Experience the action, adventure and suspense with loads of exclusive Blu-ray and DVD special features, every home entertainment collection must include Sanctum.