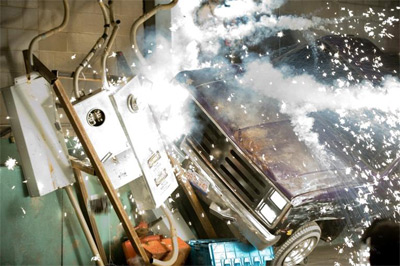 On a secluded Chicago Street two men stroll past a beautiful red Ferrari and notice that the owner has left it unlocked with the keys still in the ignition. Anticipating the ride of their life they hop into the car, only to realise that they're trapped. After killing its victims, the car cruises back into the main street transformed as an inconspicuous black car, only to be hit by a rogue driver.

When the wrecked Hybrid car is impounded at an underground garage after the collision, it doesn't take long before it begins to hunt down unsuspecting shift workers. When they discover that the car is able to morph into any model car and that it is hunting them down one by one, it becomes a high-octane fight to the death. They must kill their unlikely predator, or die trying.