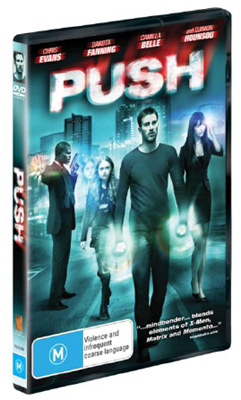 Dakota Fanning, Chris Evans and Camilla Bella use their super-human abilities in this non-stop action sci-fi. A group of young Americans with telekinetic and clairvoyant abilities are in hiding from Henry Carver ( Djimon Hounsou) a 'Pusher' with similar abilities who works for a clandestine U.S. government agency.

Whilst in Hong Kong, the 'Mover' Nick Gant (Chris Evans) is contacted by the 'Watcher' Cassie Holmes (Dakota Fanning) to seek out other 'Pusher' Kira Hollies (Camilla Belle), who has just escaped from the agency. When the trio join others with similar abilities they must fight all costs to stop Carver and escape the agency forever.

Special Features:
Audio Commentary with cast and crew
Deleted scenes with optional audio commentary
The science behind the fiction - featurette

Review: A government agency has overstepped it's mark experimenting & killing people with powers, but the time for 2nd generation super-powered to regain their freedom and fight back. Push is a super powered sci-fi action film which will appeal to those who like tv series Heroes & similar supernatural themes. Push is now available to rent or buy on Blu-ray & DVD