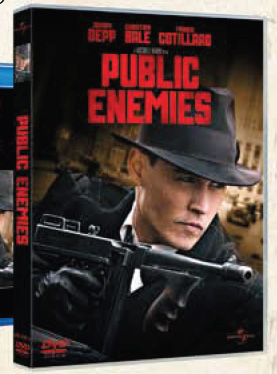 1933 - America's Golden Age of crime. Fuelled by cheap liquor and fast carsgangs of chancers, bank robbers, gunslingers and their molls cut a murderous,cash-snatching dash through the US - and became legends. Public Enemies isthe true story of America's most wanted, their nemesis: J. Edgar Hoover andhis strong-arm law enforcers, the agents of the FBI.

Public Enemy #1 was the infamous John Dillinger (Johnny Depp), who led a series of high profile bank robberies and prison breaks, all while under hot pursuit bythe FBI's Marvin Purvis (Bale) who swept the country on his own mission to wage America's first ever "War On Crime".

Shot in high-definition and based on shocking secret files and eyewitnessaccounts, Public Enemies reveals the story of the highly charming andcharismatic criminal, John Dillinger, and how his lightening raids made him afolk hero to a nation besieged by financial hardship.

With all the elements of the classic gangster genre: cars, girls and shootouts,Public Enemies is intelligent, well-crafted, violent and passionate withsomething for even the most discerning film buff. Packed with special features,Public Enemies is now available on DVD & high definition Blu-ray