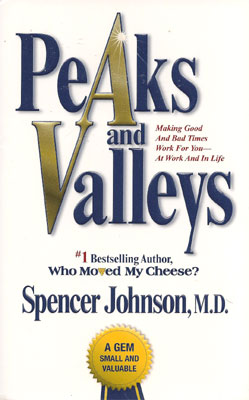 In turbulent times, there is always a book that emerges with the power to transform millions of people. In 1982, when many people felt like they were falling behind, The One Minute Manager provided a popular prescription for gaining more success with less stress. In 1998, when change began to accelerate at an unprecedented rate, Who Moved My Cheese? became one of the biggest and most influential bestsellers of all time. Now it's happening again.

Just when many feel the need is the greatest, the author of those two mega-bestsellers, Spencer Jonson, returns with a remarkably timely tale, Peaks and Valleys: Making good and bad times work for you- at work and in life!

Peaks and Valleys tells the story of a young man in search of answers to life's dilemmas, who leaves his valley home and scales a nearby peak where he encounters an old man who empathises with his struggles and reveals a unique way of looking at things and doing things, that can make him more peaceful and successful.

Through a series of triumphs, setbacks and encounters with the impact of his own choices, he gradually comes to appreciate the true depth and scope of the old man's way of dealing with good and bad times.

Renowned for his brief stories that offer simple, practical solutions to complex problems, Dr. Johnson has been called 'the king of parables' by USA Today.

'Peaks and Valleys draws on material I have been developing for a couple of decades.' says Johnson. 'I believed the time would eventually come when a story like this could help a lot of people.'

Peaks and Valleys weaves a tale of considerable scope, touching on prosperity and economic collapse, life and death, love and rejection, all with the signature simplicity and straightforward narrative style that have made Johnson's books among the most popular and widely read in the world. Beyond the reliable principles and practical tools found in the new book, it is also perhaps Dr. Johnson's most intimate book, based on his own experiences and person observations.

In these uncertain and difficult times, millions of Spencer Johnson's readers will welcome his insights and guidance to help them deal with today's Peaks and Valleys.

Spencer Johnson, M.D. is one of the world's most respected thinkers and beloved authors, renowned for tackling complex problems with answers that help millions of people of all ages and backgrounds to manage better in changing times and to rejuvenate their spirits. His book focus on discovering how to enjoy healthier success with more meaning and less stress at work and in life.

In 1982, Johnson revolutionised the publishing business with his small business book, The One Minute Manager (coauthored with Ken Blanchard) , which sold over 15 million copies and has remained on the new York Times business bestseller list for over two decades. His 1998 Who Move My Cheese? became Amazon's number one all-time bestselling title during its first 10 years; Japan's number one bestselling book ever by a non-Japanese author; and the number one bestselling translated work in China's publishing history. More than 46 million copies of Dr. Johnson's books are in print in 47 languages.

Johnson received a B.A in psychology from the University of Southern California, an M.D from the Royal College of Surgeons and completed medical clerkship at the Mayo Clinic and the Harvard Medical School. He has served as leadership Fellow at the Harvard Business School and is currently Advisor to the Center for Public Leadership at Harvard's John F. Kennedy School of Government. His work has captured the attention of major media, including the Associated Press, the BBC, CNN, Fortune, and the 'Today' show, The New York Times, Time and USA Today.