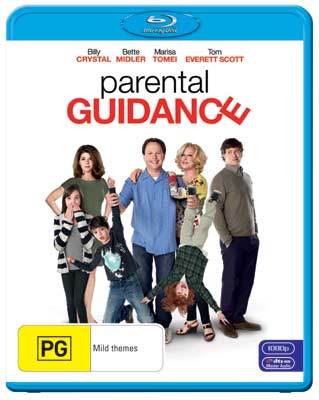 One in three Aussie parents (37%) are relying on their parents to babysit their kids, either during the week or on school holidays, with 7% of Mums and Dads dependent on Grandparents every day.

According to the study , commissioned by 20th Century Fox Home Entertainment to celebrate the release of Parental Guidance on Blu-ray and DVD on April 24, Grandparents provide a softer approach to parenting in a bid to become the favourite family figure.

More than half of parents (57%) agreed that their kids have much fewer rules to follow than when at home, with kids five times more likely to be given special treats whilst their Grandparents are looking after them.

Interestingly, despite the 'new school' versus 'old school' parenting debate, one in two parents say their own parents don't tend to comment on how they are raising their kids, leaving them to bring up their children how they see fit. Parenting expert Justin Coulson agrees that the presence of a grandparent in a positive way is the most important thing.

"Grandparents have a vital role to play in a child's life and this presence can help strengthen a child's understanding of where they've come from in a really enriching way. Grandparents are often the family member who can best instill in a child a sense of family culture and this can really help the child form their own identity."

The reliance on Grandparents to mind the grandkids is a trend which Parental Guidance star Billy Crystal believes is the role of the baby boomer generation - one which inspired the family comedy.

"It started with me babysitting my grandchildren for six days…It was a lot of work and you forget how much work it is looking after children. They need constant attention and on the seventh day I rested and then I came into the office and started writing the story."

Parental Guidance is a hilarious family comedy that sees old-school grandparents Artie (Billy Crystal) and Diane (Bette Midler) get more thanthey bargained for when they agree to babysit their daughter's (Marisa Tomei)over-protected kids. But things go from hectic to hysterical when Artie realises the kids arerunning the house with their newfangled technology, but he manages to outsmart them andachieve the impossible - bring the family closer together!

Parental Guidance is available on Blu-ray and DVD on April 24.

Follow the fun as old-school grandparents Artie (Billy Crystal) and Diane (Bette Midler) get more than they bargained for when they agree to babysit their daughters (Marisa Tomei) over-protected kids.

Things go from hectic to hysterical when Artie realises the kids are running the house with their newfangled technology, but he manages to outsmart them and achieve the impossible bring the family closer together! Parental Guidance is out now.