The EA Play Label of Electronic Arts Inc. have announced that it is time to "Pass Go and Collect $200" with the release of Monopoly Streets.

Under licence from Hasbro (NYSE: HAS), Monopoly Streets is currently available at retail for the Wii™, Xbox 360® and PS3. Additionally, EA has also released a classic version of Monopoly for the Nintendo DS™.

"We have completely re-imagined the 75-year old family favourite in a way that now jumps to life on HD screens with new, exciting gameplay that is sure to bring the whole family together this holiday," said Chip Lange, Senior Vice President and General Manager of the Hasbro Division at Electronic Arts.

"Monopoly Streets provides families and friends a way to connect and explore the world of Monopoly like they never have before-it's an experience you have to see to believe." 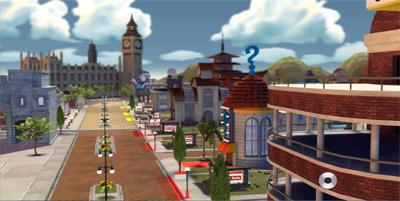 Monopoly Streets presents a new and fantastic setting that players will explore and embark on the quest to "win it all" as the game board begins to emerge around them. With each move, players can see the cityscape develop from the ground up while properties such as Park Lane and Piccadilly are bought, traded, and built upon.

Classic Monopoly game board pieces such as the race car and Scottish terrier are all fully animated and fans can choose from a variety of creatively-themed boards like Landmark City, as well as the Classic game board that has been entertaining families around the globe for 75 years. Players also can use their Mii™ for the Wii or avatar for Xbox 360 as their in-game character, as well as designate other Mii or avatars, such as those created by family and friends, to populate the bustling city.

EA's new take on the popular board game adds even more excitement to gameplay with the addition of live auctions, where players try to purchase a property at the best market value price as part of their rise to riches. The game also features a "House Rules" mode that allows players to change up and customise how the game is played, as well as an option to play with friends online and be matched to an aspiring digital real estate mogul anywhere in the world on the Xbox 360 and PlayStation 3 versions.

"EA has done a tremendous job in bringing Monopoly to millions of global fans in highly creative and immersive ways across every major digital platform this year," said Mark Blecher, Senior Vice President and General Manager of Digital Gaming and Media at Hasbro. "In its 75th anniversary year, the popularity of Monopoly continues to grow and our alliance with EA has been instrumental in the meaningful re-invention of the treasured play experience for today's digital consumer."

With additional versions of Monopoly -themed games also available on iPhone, iPod touch, and online gaming destination Pogo.com, it's never been easier for aspiring property magnates to experience the thrill of the time-honored board game on digital platforms. Monopoly fans also can experience the real estate fun with EA's Monopoly Facebook game, which will soon launch on the popular social networking site. Consumers can keep an eye out for other Monopoly-themed releases on additional digital platforms this holiday.