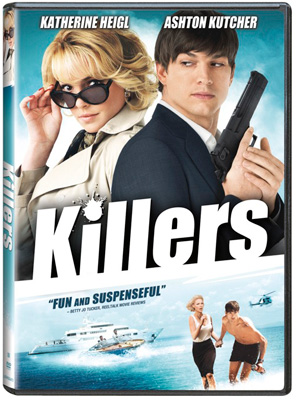 However, events are cut short when bullets start flying, and his little secret is revealed. Confronting the news head-on, Kornfeldt is determined to discover what else he might be hiding - all the while trying to dodge bullets, keep up neighborly appearances, manage the in-laws, and work out some major trust issues. ...And you thought suburban life was easy!

Katherine Heigl (Jen) is desperate of love (again), and while on vacation in France with her parents she meets the man of her dreams Spencer (Ashton Kutcher). Spencer is a trained assassin, but when he meets Jen he wants to settle down to a normal life. But he'll soon find out his normal life is not what it seems and he must find out who is behind it before the whole street comes after him.

Fun, action & entertaining, Katherine is perfect in this role and Ashton is a killer. A must see for a fun night in..