Synopsis: At age fifty, Alice Howland has it all: a Columbia University linguistics professorship, a devoted husband, and three loving children. Her life is a whirlwind of work and family, and she thrives on it.

Flying to L.A, Alice is lecturing at UCLA when something unexpected happens. Mid-sentence, she loses a key word and waits awkwardly until a replacement comes to her. This is very unusual for this highly accomplished academic.
After spending time with her daughter Lydia, who against her mother's wishes is striving to be an actress, Alice re-turns to New York. There, a second mental lapse occurs. While on her regular run across campus, Alice loses all sense of her bearings - the bottom just drops out; she goes blank.

Although she keeps this from her family, Alice begins to see a neurologist and goes through a battery of tests. She is convinced she has a brain tumor, but the doctor raises an even more disturbing likelihood: Early Onset Alzheimer's disease. It's at this point Alice breaks down and tells her husband, John.

John's initial reaction is one of skepticism. Accompanying Alice to her next doctor's visit, he raises the issue of a ge-netic test, and the doctor concurs. Unfortunately, Alice tests positive for the presenilin-1 gene, an indicator of Famil-ial Early Onset Alzheimer's " a rarer form of the disease that has a fifty percent chance of being passed onto her chil-dren.

At the next family gathering Alice breaks the news. The children are all stunned by this revelation and find it diffi-cult to process. Throughout the following weeks, Alice has to deal with the ramifications of the disease on her mar-riage, her family and her career.

Posing as someone enquiring on behalf of a parent, Alice visits the Alzheimer's unit of a local nursing home. Seeing a fate she cannot accept, she makes a drastic decision that will radically affect her future when she gets to the point of incapacity.

Then, when summer spent at a beach house brings a sense of renewal, Alice struggles against all odds to maintain her life, her relationships, and her sense of self. 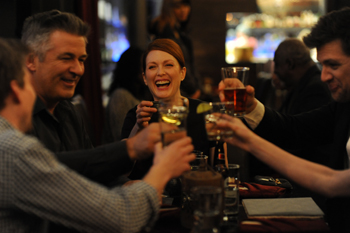 Richard and I received a phone call in December 2011 from the Brit-Australian producing duo, Lex Lutzus and James Brown, asking us to take a look at a novel for adaptation. It was one of those out-of-the-blue opportunities that filmmakers live for, but when we heard the subject of the book, it gave us pause. The outline they pitched - a brilliant woman in the prime of life receives a diagnosis of early onset Alzheimer's disease - suggested a film about illness and sadness and loss. It just felt too close to home.

Earlier in the year, Richard had visited a neurologist in Los Angeles as a result of a slight slurring of his speech. The doctor had taken one look in his mouth, at his strangely undulating tongue, and said, 'I think it's ALS." We'd spent a lot of time in the following months dealing with the repercussions of this, both medically and emotionally. Read-ing the first few chapters of the book, certain similarities resonated eerily with our own experience: the neurologist Alice initially visits asks the same questions Richard had heard at his early examinations when there were suspicions of a stroke; and the growing sense of dread as the diagnosis approached, the sense being cut down when life was at its fullest, was all too familiar. Did we really want to take on this movie right now..?

Alzheimer's and ALS are of course very different diseases. Further down the line when we met Elizabeth Gelfand Stearns, the producing partner of Maria Shriver, she put it neatly: 'They are almost the exact opposite of each other - Alzheimer's attacks the cognition, initially leaving the body unscathed, whereas with ALS the intellect stays intact and the body..." she tailed off not wanting to cause embarrassment. The diseases however also have similarities: they are both terminal, incurable, and have the effect of isolating the patient from the world at large. Most crucially, both diseases eat away at the sense of identity and make it vitally important to hang on to yourself.

We started getting sucked into the book. It's a compelling story, made emotionally accessible by Lisa Genova's forth-right, honest writing. As we continued reading we realized the movie that could be made from it should have the same crisp and direct tone. The novel looks in detail at the quotidian impact of memory loss on Alice's professional life, her daily routines, her social life….and then there are the family dynamics...

'Have you ever seen Tokyo Story?" Richard typed into his iPad speech-to-text app on our first meeting with Kristen Stewart. 'No, I haven't," she said, 'but I will." Ozu's 1953 masterpiece had been a longtime favorite of mine and of Richard's. I had first seen it when I was a student at Fukuoka University in Japan, and Richard had included a cru-cial reference to it in his first feature film Grief in 1993. The movie resists sentimentality and gains tremendous emotional power through restraint. It has a universal insight into the way families behave in the face of illness or old age with its Lear-like template for a three-child family that was echoed beautifully in Lisa's book.

We became enamored of its central character. There was something undeniably inspiring in Alice " in her tenacity, her willfulness, the way she would never take it lying down. Whatever the disease brought, she was determined to handle it in the most practical way possible. I don't know exactly in what chapter it happened, but the literary Alice we imagined from the page started to lose her dark curly hair as it turned a fiery red. 'Who do you think could do this?" I asked Richard. 'Julianne Moore," he typed.

The more we thought about it, the more perfect the casting. Julianne could not only project the scintillating intelli-gence and complexity of a linguistics professor but also the vulnerability and simplicity of the later stages. She'd be able to master every beat of the character's deterioration. She is quite simply one of the finest actors on the planet. We had met with her a few years before on another project, pitched hard to get her to do it and eagerly waited for weeks and weeks as she deliberated and finally passed. This time it was different. We sent a message to her about the project and she read the book even before the script arrived. A day or so later, we were on Skype. Within sec-onds she said, 'I'm in."

As we read the final chapters of the book, we started considering the look of the film. Our key concept was the sub-jectivity of Alice's experience " that the audience should understand her point of view and be privy to her internal life in a way other characters in the story weren't. It would require a deeply personal camera and editing style " re-sponding to her mental state, her moods, her perception " breathing with her. We had the great fortune to work with two Frenchmen on this project - the internationally renowned cinematographer, Denis Lenoir; and Nicolas Chaudeurge, the editor of one of our favorite recent movies, Fish Tank. They both shared our vision of how the movie should look and feel and were able to support Julianne's performance at every turn. Similarly, the production design, the costumes, the hair and make-up - all had to be tied to the precise stage Alice was at in her struggle against the disease. 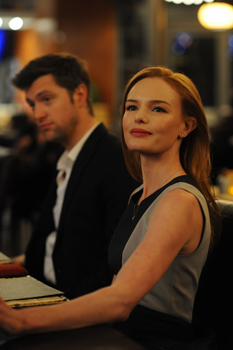 Under the auspices of Killer Films, the unstoppable Pamela Koffler and Christine Vachon, and with financing from Marie Savare de Laitre at BSM, the production started moving forward - pre-production coinciding with the worst New York winter for 20 years. I came out East to oversee this phase while Richard remained in sunny Los Angeles. When I left, he had only just resigned himself to no longer driving, but he arrived, a week before pre-production, with his hands and arms barely working. He could no longer feed or dress himself and could type only at certain angles with one finger.

Undaunted by this, he was on set every day, directing the movie, despite incredible physical difficulties. This silently infused the whole production with a sense of deeper purpose. In essence, this was what the movie was about. Right there. Everyone felt that something special was going on and bore the long hard hours with grace.

The ending of the novel is as powerful as it is unexpected. It caught Richard off guard. He was stunned by it " emo-tionally wrecked. I was a few chapters behind but I just looked in his eyes and saw what was there. 'I guess we're doing the movie," I said.
-Wash Westmoreland
Los Angeles 9/1/14

Still Alice was written by first time novelist Lisa Genova and published by Simon and Schuster in 2009
Still Alice debuted #5 on the New York Times bestseller list and spent over 40 weeks on the list
There are over 1.8 million copies in print
Still Alice has been translated into 25 languages around the world

Carrie White is a shy girl outcast by her peers and sheltered by her deeply religious mother, who unleashes... Catherine is suspicious that David, her husband, is having an affair. Catherine seeks out Chloe, an escort,... 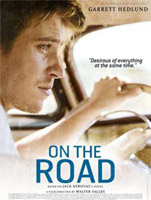 On the Road is based on the seminal beatnik novel by Jack Kerouac, about a young man who sets out to travel the... Welcome to 1975 where the cars are fast, the music's faster and David Bowie is king. Welcome to The Runaways...

In The Twilight Saga: New Moon, Bella Swan (Kristen Stewart) is devastated by the abrupt departure of her...

It would be fair to say that much has changed in the life of Kristen Stewart since we first met about 5 or 6...

Kristen Stewart in The Runaways

Kristen Stewart and Dakota Fanning star in this music-fueled story of the ground-breaking, all girl, teenage...