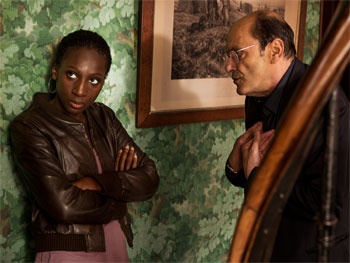 Synopsis: Max has been a caterer for 30 years.

He has organised hundreds of events, and is probably pretty close to throwing in the towel. Today there will be a magnifcent reception in a 17th century château: one more wedding, Pierre and Helena's.

As usual, Max has taken care of everything: recruited his wait staff, cooks, and dishwashers. He has recommended a photographer, reserved an orchestra, and arranged for the ﬂoral decorations: in short, all the ingredients to make the reception a success…

But in accordance with Murphy's Law, all his planning will be upset, and everything will go wrong, turning every moment of joy and emotion into a disaster and ending in chaos.

From the earliest preparations to the crack of dawn, we will follow this evening from behind the scenes, from the point of view of his staff, who can count only on the one thing they have in common: knowing how to throw a good party. Jean-Pierre Bacri: The Olivier Nakache and Éric Tolédano trademark. When I read the screenplay, I rediscovered everything that I love about them, and that we don't often see at the movies: unabashed comedy that makes you laugh, but in which you often sense a great liking for the characters. They have a way of looking at people, a human touch that I love and that moves me. It's what I liked so much about Those Happy Days, and then obviously in Intouchables. I liked that about them before even I met them, because you couldn't be a really bad person and make movies like that.


Question: Do you feel a connection between you and them?

Jean-Pierre Bacri: In our writing, yes. It's not for me to say, but what we have in common is our love of humor and the fact that we couldn't write any other way. So even though we each have our own style and way of making movies, you can in fact detect a family relationship between us.


Question: You were present as of the writing of the project. Is that a habit with you?

Jean-Pierre Bacri: It depends on the screenwriters and director. Some are very stubborn about their texts – that's not a reproach, because when Agnès Jaoui and I write a film, we're that way too: we work so hard on the writing, on the dialogues, that you need a very convincing argument just to get us to change one line. And all the more so, because what the actors suggest is often something we had already tried and that didn't work. Nakache and Tolédano are very accommodating about their texts. And since I soon saw that they were amenable to suggestions, I wted a few ideas. I remember, for example, that there were hardly any women in the first drafts of the screenplay. There wasn't even a bride. What a shame to talk about a wedding without a bride. That kind of remark prompted some fruitful discussions. And as we went along, a sense of complicity arose between us, and since they were so friendly and open to change, it was very pleasant working with them. Question: Did the subject of marriage inspire you?

Jean-Pierre Bacri: No, because I'm not a great fan of marriage, and the wedding here is just a pretext for bringing people together. It's the way Nakache et Tolédano treat the reception, from the inside out, that inspired me. Because by showing how the staff working in the wings is organised, they draw out the humanity that I love so much. There are quite a few losers on the staff, which creates some comic situations, but emotion too, because people like that are often touching in their disarray. What I like a lot here is that with the staff, we depict a microcosm of society. In every country, there are some talented people, some less talented, but the thing is to make them work together. Not everyone can become the President of France. But even the lowest of the low, a metro conductor… each one of us can do something useful and find his or her place.


Question: You embody a kind of director in this story, because you are a chief of staff. What about this character touches you?

Jean-Pierre Bacri: His stubbornness, even with his weakest links. Under his crabby, cantankerous, and exasperated exterior, he is a real mensch. He takes care of his guys, never leaving any of them by the wayside. In real life, I like people like that; guys like him, who will always give people down on their luck another chance. They often talk a lot of hot air, they like to play the dictator, but once you get to know them better, you realise that they'd give you the shirt off their back.


Question: What is also touching about him is his solitude in the group…

Jean-Pierre Bacri: That's right. He watches out for everyone, but no one really has his back. He is going through difficult emotional times, and tries to cope with the sadness and with what he has to get through with here.


Question: What do you enjoy about working on an ensemble flm?

Jean-Pierre Bacri: It's a great pleasure. Agnès and I have never written a film with just two main roles, surrounded by bit players, because my pleasure is never whole, if I'm the only one really acting. Playing with someone who is just there to deliver lines would make me miserable; that's not why I'm a member of this profession. That ensemble spirit may come to me from the theater, but maybe it's just an attitude, almost a policy, that I happen to share with Éric and Olivier. Question: What did you learn from the young actors you worked with?

Jean-Pierre Bacri: I always learn from people with talent, and there were a lot of them here. On location, I was surprised by their ﬂexibility and sense of improvisation. Éric and Olivier often let people express themselves, so we saw a lot of good ideas come forth. Those young actors were effervescent. You could see that they were truly having a good time acting. Besides, that is what all actors have in common: whatever their age, they love to have fun.


Question: Does an ensemble film where everything is choreographed leave room for improvisation?

Jean-Pierre Bacri: It's more difficult. But in any case, I think that when improvising, you can end up with 90% of waste, because most of the time your stuff is too facile, or sophomoric. Nothing is as good as tight writing, thought out and pondered. Even the wisecracks.


Question: What was the atmosphere like on the set?

Jean-Pierre Bacri: Both joyous and focused. Éric and Olivier take things seriously. They do a lot of takes to satisfy their demanding natures. I always thought that after 5 or 6 takes, I'd have nothing more to say, but they proved me wrong. Sometimes it worked because they too found inspiration in a scene, and threw us some new lines. On their sets, you work hard to obtain the right results, in any case as they see it, and that takes time. But it was fun, and so I was happy to play along.