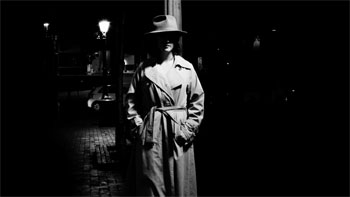 Synopsis: Reclusive writer Becky Holt is being stalked in her own home. Struggling comedian Sam Slade is being evicted from hers. When Sam decides to play private detective for extra cash, these two oddballs are thrown together to crack Becky's case... if they don't get themselves killed first.

Question: Where did the idea for Trench come from?

Perri Cummings: Having read a lot about internet trolling, and having some friends that had suffered from some vicious online attacks, finding a way to fight back was the initial spark for a story about an outspoken online writer who finds out one of her internet stalkers actually wants her dead. We wanted to make something inherently Melbourne, but that also paid homage to some of the great film noir tropes, so we started riffing on the idea of a Melbourne stand-up comedian that is so broke she takes on a job as a private detective to pay her rent. This gave us the odd couple at the heart of Trench, trying to catch Becky's attacker before they both end up dead. Question: How would you describe Trench?

Perri Cummings: A gal-powered detective comedy that looks and feels like a film noir set in modern day Melbourne - a collision between classic cinema and the messy conflicted world we live in.


Question: What inspired the debut feature in black and white?

Perri Cummings: Going full noir meant it had to be in black and white; it also gives the film an otherworldly quality, the fast-talking, wise-cracking characters feel more real in black and white. It's also a beautiful way to show off Melbourne.


Question: Can you tell us a little bit about developing clever and flawed female leads?

Perri Cummings: For me, it's really important to create rich, complex characters that have lives before the moment we see them on screen. The more real they are, the more we can relate to them, the more fascinating they become. How can we identify with a character that doesn't show their flaws - that doesn't feel truly human? I think we are all capable of the whole range of human feeling and experience. The good, the great, the bad and the surprising, so long as it is grounded in truth and a real humanity. Isn't that part of the fun of creating genre cinema? You create a real person and then you put them in a situation that truly tests them, the more real, the more interesting the journey. Also, as an actor, I don't want to have to play a stereotype, I want to play real women in all their complex and sometimes dark glory.

Perri Cummings: My characters feel very real because they talk to me all the time! I will borrow a story or trait from someone I know, but my characters are all born from the complex lives they have led up to the moment we meet them. It feels a little like I am creating people I wish existed - or ones I'm very glad don't exist, because they would probably scare the hell out of me!


Question: Why was it important for you to have Trench portray real-life behaviour, on the big screen?

Perri Cummings: I think it's important to see ourselves on screen, to capture where we are and what we are going through right now, even in a world of heightened reality. I am fascinated by human nature and how it is ever evolving, I love characters that buck against the stereotypes that are often portrayed in big-budget film and TV, creating people who don't have all the answers, who are struggling with life, then throw them into extraordinary circumstances. I think it is good to break free of the expectations and assumptions of others, whether it is in your writing or real life. Perri Cummings: I am a keen people watcher and often make up stories from what I see. I think I use real life and real people as a springboard to creating stories. I also love classic literature and find great inspiration from great writers. I have just finished a modern day adaptation of Robert Louis Stevenson's 'The Strange Case of Dr Jekyll and Mr Hyde', also set in modern day Melbourne and with a female monster, but not in black and white this time - this story needs to be in lush and glorious colour.


Question: Was it easier or more difficult to star in a screen-play you'd written?

Perri Cummings: There was a moment when I had to let go of the writing and just be an actor, I had to discover the character all over again and create relationships with the other characters. It didn't even help me learn the lines - you think if you write something you should automatically know it, but it's not the case! You have to start at the beginning, but you do have a great instinctive understanding of how they tick and the journey they need to take, so, in that way, it's probably cheating!

Perri Cummings: My partner Paul Anthony Nelson and I are busy writing our next feature, Inheritance, an Australian gothic horror drama that feels like a ghost story. We are currently crowdfunding to finance the film, where every dollar raised will be matched by Creative Partnerships Australia's MATCH Lab program: https://australianculturalfund.org.au/projects/inheritance/
Filming is planned for late 2018, after which we will be working toward filming Hyde.