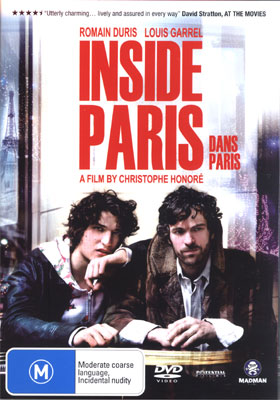 Inside Paris is a beautifully observed family drama starring two of the most exciting and charismatic young actors in French cinema today. An elegant, deeply felt tale of a family dealing with a son's depression, Inside Paris has also been called a kind of New Wave homage.

After splitting up with his long-term girlfriend, Paul (Romain Duris - the Beat My Heart Skipped, Exils) has moved back into the Paris flat his younger brother Jonathan (Louis Garrel - The Dreamers, Ma Mere) shares with their protective, divorced father (played by veteran actor and composer guy Marchand).

Depressed and lethargic, he remains housebound whilst Jonathan - a devil-may-care womaniser - walks the streets of Paris chatting up girls. The emotional interplay heightens with the arrival of the boys' glamorous mother (Marie-France Pisier).

"Luminous, enlightening and often hilarious.... A crowd pleaser..." Time Out