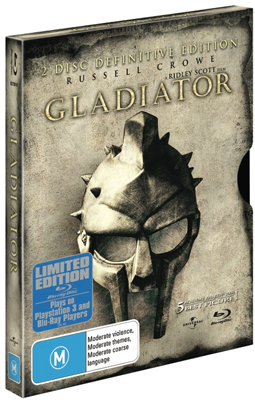 Hollywood heavyweight Russell Crowe stars in Gladiator as victorious General, Maximus Decimus Meridias. Named by dying emperor, Marcus Aurelius, Maximus has been named keeper of Rome and its empire, so that rule might pass from the Caesars back to the people and Senate. However Marcus' neglected and power-hungry son, Commodus (Joaquin Phoenix) has other ideas.

Forced into slavery by the corrupt and incestuous Commodus, Maximus becomes a gladiator. His prowess in the arena eventually leads him to Rome, the Colosseum and a vengeful showdown with the new emperor.

Disc 2:
Strength and Honour: Creating the World of Gladiator:
Tale of the Scribes: Story Development
The Tools of War: Weapons
Attire of the Realm: Costume Design
The Heat of Battle: Production Journals
Shadows and Dust: Resurrecting Proximo
The Glory of Rome: Visual Effects
Echoes in Eternity: Release and Impact
Production PODS