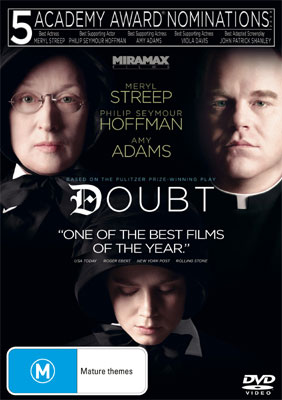 Academy Award® winning actors MERYL STREEP and PHILLIP SEYMOUR HOFFMAN go head-to-head in DOUBT, one of the most talked about dramas of the year.

Written and directed by playwright JOHN PATRICK SHANLEY, DOUBT is an unforgettable story that will challenge your perceptions about right and wrong, revealing also the devastating effects of blind justice.

Set in 1964 during a great time of moral and social change in the US, Academy Award® winner PHILLIP SEYMOUR HOFFMAN plays Father Flynn, a forward thinking priest who is enthusiastically set on introducing change to the rigid structure of St Nicholas, a strict religious school in the Bronx.

MERYL STREEP is Sister Aloysius Beauvier the principal of St Nicholas and remains determined to continue to run the school according to her strict custom, using fear and discipline against those who challenge her.

Sister Beauvier, propelled by a crusade to expose the truth and bring the priest to justice, embarks on a campaign of blind justice to have Father Flynn removed from the school, and in the process threatens to devastate and tear apart the church and school community.

What follows is an intense, suspense filled drama that will challenge the audience's perception of morality, truth and authority.

Based on the Pulitzer Prize - and Tony Award - winning play, DOUBT is a mesmerizing, suspense-filled drama with riveting performances from Meryl Streep, Philip Seymour Hoffman, Amy Adams and Viola Davis that will have you pinned to the edge of your seat.

Sister Aloysius Beauvier (Streep), the rigid and fear-inspiring principal of the Saint Nicholas Church School, suffers an extreme dislike for the progressive and popular parish priest Father Flynn (Hoffman). Looking for wrongdoing in every corner, Sister Aloysius believes she's uncovered the ultimate sin when she hears Father Flynn has taken a special interest in a troubled boy. But without proof, the only thing certain is doubt.

DOUBT, available on DVD and Hi-Def Blu-ray, also includes riveting bonus features including The Cast of Doubt, The Scoring and Audio Commentary.

Don't miss your chance to own one of the most acclaimed films of the year when DOUBT is released to DVD and Blu-ray 10 June 2009.

Review: A compelling cat and mouse desperate power struggle story, delivered by 2 of the most convincing and talented actors, Meryl Streep & Phillip Seymour Hoffman. If you see one move this year, this is it.