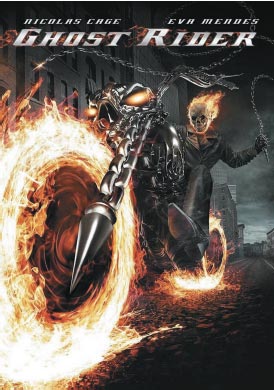 See even more of the flaming hot hero in the two-disc Extended Edition Of Ghost Rider -available to Rent or Buy on DVD.

After setting box offices around the world ablaze, Ghost Rider is shaping up to be one of the hottest home entertainment releases for 2007. To mark this, Sony Pictures Home Entertainment has announced a very special extended edition two-disc set of the film, jam-packed with never-before-seen footage that's almost too hot to handle!

But Blaze harbours a dark secret. Faced with the prospect of his father's death, he sells his soul to the seriously sinister devil-like character, Mephistopheles (Peter Fonda -Easy Rider).

Directed by Mark Steven Johnson (Daredevil), Ghost Rider is a supernatural epic that thrills and amazes at every turn. Special features exclusive to the extended edition two-disc set of Ghost Rider include an enthralling look into the amazing special effects created by Sony Pictures Imageworks Inc as well as a special documentary insight into bringing a comic hero to flaming life.

The special extended edition two-disc set of Ghost Rider is a must-have for any supernatural fan or comic buff, with footage not seen in cinemas returning to complete the Director Mark Steven Johnson's original vision. The theatrical edition and the extended edition two-disc set of the DVD also include an entertaining audio commentary by Johnson, producer Gary Foster and visual effects supervisor Kevin Mack. 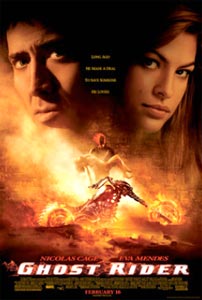 15 minutes of never-before-seen footage, Audio commentaries by director Mark Steven Johnson, visual effects supervisor Kevin Mack and producer Gary Foster, 'The Spirit of Vengance' behind-the-scenes 3 part documentary, 'Sin & Salvation' 4 part feature on the comic origins of Ghost Rider. Review: Not knowing the comic book behind the story, think this made for an interesting film in the realm of supernatural. Although quite dark, the special effects were inpressive and the storyline unique.