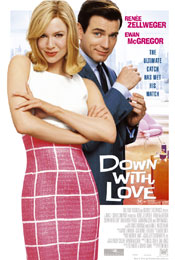 Renee Zellweger (Chicago) and Ewan McGregor (Moulin Rouge) are the toast of the town in the most stylish romantic comedy of the year! From the producers of American Beauty and the director of Bring It On comes a teasing, tantalizing battle of the sexes that is pure enchantment. A romantic comedy with a twist, Down with Love puts a spin on the golden age of the classic Rock Hudson-Doris Day comedies.

Her book is a pre-feminist manifesto on saying "no" to love and "yes" to career, empowerment and sex. As Barbara's book skyrockets to the top of the best-seller charts, she becomes the target of ace journalist & ladies man Catcher Block, who is determined to take her down!

Set in the early 1960s, every frame pops up with the super-saturated palette of sixties Technicolor as it follows the story of Barbara Novak hitting New York City with her new book 'Down with Love'.