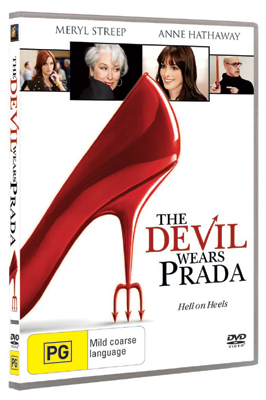 Surviving as the assistant to the boss from hell is ironically the job a million girls would die for in 'The Devil Wears Prada', Meryl Streep stars as Miranda Priestly, the notorious and influential editor of Runway magazine, who coolly dominates the fashion world with a finely manicured fist. Nothing stands in Miranda's way of making Runway the most successful fashion magazine in the world, including a long line of failed assistants.

Fresh-faced actress Anne Hathaway (Brokeback Mountain, Princess Diaries 2:) stars as Miranda's new unlikely, unrefined, size six assistant Andy Sachs. A total misfit in the ultra-sophisticated world of high fashion, Andy's determined to prove that she is more than a stylish slave and launch her career as a serious journalist, but at what cost?

'The Devil Wears Prada' is based on the internationally best-selling novel by Lauren Weisberger, which held a spot on the New York Times bestseller list for six months. 'The Devil Wears Prada' DVD arrives runway-ready with special features including a director's commentary, deleted scenes, featurettes and much more!

Synopsis:
Based on the hilarious best-selling novel, this sinfully funny movie starring Academy Award® winner Meryl Streep and Anne Hathaway is "sensationally entertaining in every way" (Maxim). As assistant to impossibly demanding New York fashion magazine editor Miranda Priestly (Meryl Streep), young Andy Sachs (Anne Hathaway) has landed a job that "a million girls would die for." Unfortunately, her heaven-sent appointment as Miranda's personal whipping girl just might be the death of her!

Review: This would undoubtedly be my favourite performance by Meryl Streep.