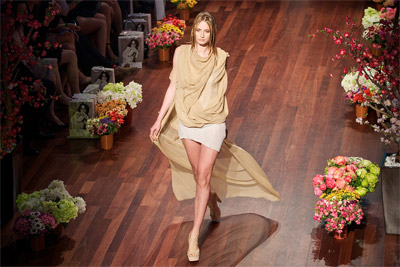 After opening to rave reviews last year the Designer Capsule runway shows will once again feature high on the Perth Fashion Festival (PFF) calendar at Fashion Paramount in September 2012.

Featuring some of Western Australia's most exciting up-and-coming and established designers, Designer Capsules 1 and 2 will showcase the Spring Summer 2012/13 collections of Daniella Caputi, Zsadar, Lisa Marjanovich, The Butcher and the Crow, Kim Barton, Steph Audino and Garth Cook.

PFF introduced the designer capsule concept in 2011 to expand the runway showcase opportunities for its local designers. Each designer will present 15-20 looks with their own choice of runway theme, music, lighting, hair, make-up and models.

'Each capsule show appeals to a different demographic, allowing guests to view multiple labels in the one show. The Designer Capsule format allows each label to put their own creative stamp on their individual showcase, and provides more runway opportunities for the ever-growing contingent of talented WA designer labels."

Designer Capsule 1, featuring Daniella Caputi, Zsadar, Lisa Marjanovich, The Butcher and the Crow is set to take on an edgy, somewhat dark theme that will create an air of mystery for guests.

Following the success of showing at Mercedes-Benz Fashion Week Australia 2012, ZSADAR will showcase its latest collection, Mysteries of the Organism on home soil. ZSADAR designer Shane Newton explores the idea of mutated beauty in his collection which represents sabotage and the sublime.

Having showcased her debut collection at PFF 2011, Lisa Marjanovich will return with her beautifully feminine yet sensually confident pieces.

Established in 2009, The Butcher and the Crow was nominated in the same year for Perth Fashion Festival Designer of Tomorrow and has continued to be inspired by beautiful fabrics and specialised dying techniques, celebrating handmade design at its most seductive.

Designer Capsule 2 features Kim Barton, Steph Audino and Garth Cook and will provide guests with a flirty and playful show.

Kim Barton will make her Perth Fashion Festival debut since launching her label this year. Through thoughtful construction and attention to detail Kim Barton oozes a feeling of cool sophistication.

Steph Audino's trademark attention to detail and romantic designs are inspired by her travels and her everyday surroundings. Her latest collection Seaside Sanctuary is inspired by the captivating nature found in and around the ocean.

Designer Capsules 1 and 2 will be held on the Fashion Paramount runway at Hackett Hall – Western Australian Museum in September 2012. Designers for the third and final capsule show will be announced in the coming weeks.

Perth Fashion Festival is supported by the State Government through Eventscorp, the Department of Culture and the Arts and the City of Perth.

The 2012 campaign images and further information on PFF 2012 program of events will be unveiled in coming weeks.
Perth Fashion Festival 19-25 September 2012.