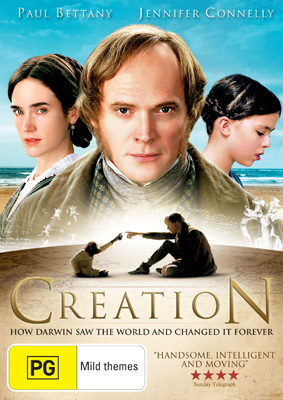 Starring Paul Bettany and Academy Award Winner Jennifer Connelly, Creation is a deeply moving and inspirational story of how Charles Darwin conceived one of the most explosive ideas in history.

Directed by Jon Amiel (The Core, Entrapment) from a screenplay by John Collee (master and the Commander, Happy Feet), Creation is based on Randal Keynes' book, 'Annie's Box', about the life of his great great grandfather, Charles Darwin.

Darwin is a vibrant father, and husband whose mental health gradually buckles under the weight of grief after the death of his daughter, Annie. The tragic event sharpens Darwin's conviction that natural laws have nothing to do with divine intervention. To his contemporaries, this is an idea so dangerous it seems to threaten the existence of God.