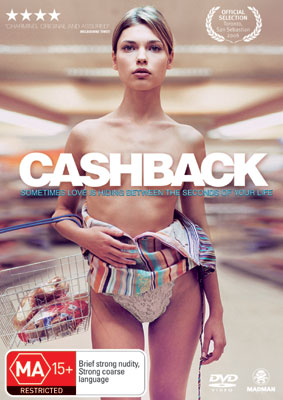 When London art student Ben Willis goes through a painful break-up, he develops insomnia. To kill time, he starts working the late night shift at the local supermarket.

There he meets a colourful cast of characters, all of whom have their own art in dealing with the boredom of an eight-hourshift. Ben's art allows him to see the haunting beauty of the everyday world and the people inside it - especially Sharon, the quiet checkout girl, who perhaps holds the answer to solving the problem of Ben's insomnia.

Sean made his professional debut at the age of ten in Michael Boyd's acclaimedproduction of Macbeth at the Tron Theatre in Glasgow. After six years with theScottish Youth Theatre he went on to play 'Tom' in the film THE WINTER GUEST,directed by Alan Rickman. Sean is probably best known for playing 'Oliver Wood',the dreamy Quidditch Captain, in the first two HARRY POTTER Films, which hasearned him a legion of fans around the world. Other theatre and television workincludes: The Crow Road and Charles II for the BBC and most recently on stage inSharman Macdonald's Girl With Red Hair.

Sean Ellis started taking pictures when he was 11. Trained as a still lifephotographer, Sean moved to London from Brighton in 1994. Applying hisknowledge of the still life and using it to light fashion models helped to make himone of the new generation of fashion photographers who were most sort after inthe late nineties.

His work with magazines such as iD, The Face, Visionaire, Dazed and Confused,Numero, French, British, Japanese, and American Vogue has often pushed thedarker side of fashion photography with a style that has been described as'cinematic'. This led to a crossover with moving film and string of acclaimed musicvideos followed.

He has directed commercials for Jean Paul Gaultier, Land Rover, Rimmel, 02, EAGames and has collaborated with David Lynch on a series of fashion images thatwere published in Harper's Bazaar.

'A photograph everyday for a year' was the idea behind his first published book'365 - A Year in Fashion' which includes commercial and personal work takenduring 1999.

You're an internationally renowned photographer, you've directed music videosand advertising films... Did all these activities naturally lead you to directing afeature film?

Nowadays, thanks to video, you can make films for nothing. But when I was young,the only way you could practice making films was with the costly 16 mm. process.So, to create the images I had in my head, I first turned to photography, althoughmy aim has always been to become a filmmaker.


But did you have to learn a new craft when you directed CASHBACK?

You learn on the job every day, especially on a set. But the main way I learned wasby watching films. I've always been obsessed by the question, "Why did I like suchand such a film?" Ever since I was a child, I've always written down in a notebookwhat I liked, in terms of the photography, special effects, or even the credits.


So, you weren't under any particular pressure when you directed your firstfilm?

You know, when you're a photographer, you have about a dozen people on the set,waiting for you to do something with your camera. But when you're a director,you're surrounded by a director of photography, a sound engineer, a wardrobesupervisor, a set designer, etc. And you can rely on them. So, in that sense, there'sless pressure on a director than on a photographer. In fact, that's what I like aboutmaking a film: working with other people.


For your first film, you wrote the screenplay, too...

I'm not a screenwriter. My desire to write came from the fact that I wasn't readinganything interesting. Then someone said to me, "Why don't you write yourself?" So,that's what I did. But as I'm not a writer, I need to mentally visualize first thewhole film before I put it down on paper. That's how I work. It's a bit laborious andstrange.


This film came together incredible fast...

Having directed the short film (Note: which was included in the film), I wonderedhow I would develop this story to turn it into a feature film. Once I'd found thebeginning and end, I said to myself, "From now on, I'll write ten pages a day." So,the actual writing took seven days. Then, we went into pre-production.


Do you realize that this kind of thing never happens in the movies?

I'd been contacted by the studios, but all their projects took forever to get off theground. I couldn't understand it. I'd say, "We have a screenplay. Why can't we filmit?" I was told that it wasn't as simple as that, that it needed more development orrewriting, etc. I was sick of it, so I wrote a screenplay and I said, "Here's the story.Let's cast it, budget it, and shoot it." And that's what we did.

As simply as that....But that's how it happened! My theory is that if things are supposed to happen,they will... And if they're not supposed to, then there's a good reason.


To what extent is Ben's story yours?

It is in a way. I've never worked nights in a supermarket. But Ben's ability to stoptime, to suspend it, and to capture emotions - that's like my work as aphotographer. And Ben's childhood memories are more or less mine. The one aboutthe Swedish au pair, for example, is genuine. (laughs) To think that some peoplethink it's a stereotype!


So, is Ben's view of beauty yours?

Partly. It's true that there can be something depressing about beauty. When youcome across it by surprise, it's so intense... Whether it's a work of art, or a man orwoman you meet in the street... I sometimes spend the next few hours stuck onmoments like that... And there are so many of them! It can go to your head, it's sopowerful.

With CASHBACK, one gets the feeling that you wanted to work on subjectivity…The films I like play on emotions. That's what I look for, stories in which you'replunged, immersed emotionally. So, with CASHBACK, I too wanted to lead theaudience into an uninterrupted flow of thoughts and actions - Ben's. Every scenehad to flow on from the one before in a sort of current of perceptions which carriesalong the audience without their realizing it. Thus, the flashbacks, for example,had to remain almost imperceptible, without any breaks, so we could follow Ben'sprogress. That's also the reason behind the scenes in which we go from one set toanother without cutting.


Would you say that making movies is "making time"?

Yes. And you have to have something to say. When you make a film, you work onthe duration, or on a series of moments, whereas in photography, all the work isconcentrated on capturing a fraction of a second..


The supermarket is a common setting in our lives, but little used in films. Howdid it go, shooting in a place like that?

It's a "self-lit" set. We added very little in the way of lighting. You can make asupermarket interesting, but at the start, I didn't want to - it's a sad place for Ben,and it had to be so for us, too. Then, as we get further and further inside thenarrator's imagination and he starts to enjoy the supermarket, we made itimperceptibly more brightly coloured, more attractive. That's what you see in thesecond part of the film.


One of the important choices you made as director was to cast Sean Biggerstaffas Ben. He's not a typical young lead...

He gives off something non-aggressive, he has an aura of calm. He's also relativelymalleable. For the screen test, I asked him to record the voiceover using differentaccents. I then spent a while dreaming of the film as I listened to this cassette onwhich he displayed a wide variety of voices. But the main reason I chose him wasyou don't really see him as a sexual deviant. (laughs) Because if you think about it,what Ben does is a little bit suspect.


If you could stop time and you take advantageof that power to undress women, would you go telling everyone about it?!

Probably not... I was very aware of this pitfall. As early as the short film, Iremember showing the film to girlfriends and asking them, "Do you think this guy isa pervert?" If they had said yes, I would have got it all wrong. I needed them to saythat he was adorable, touching, and ideally even say something like: "You know, Iwouldn't mind if he did the same thing to me"!


You had to direct the actors - that's one of the main differences with being aphotographer...

Actors are very interesting. To me, a good director is someone who knows people,who understands how they work and who then uses that to get what he wants. It'san art and it's very tricky. To think that actors go along with it to earn their livingis crazy.

With Sean Biggerstaff, he worked better under pressure and that meant notshowing him playbacks and not giving him too much praise. This uncertainty madehim go with his instincts and he has great instinct! On the other hand, with EmiliaFox (Sharon), I had to spend a lot of time describing the character and her pastbefore the shoot so she could feel what it was that Sharon was going through andthen she played it so beautifully from there.


Emilia Fox said the film could be described as "a way of learning to loveimperfection". Do you agree with that?

I think that the film tells us that what we spend our lives looking for is often rightin front of us. And if we take the time to see things calmly, we find in us what wewant or we find ways to obtain it. And what is supposedly imperfect can be seendifferently. I think that the little girl with hairy arms is adorable, I don't know why.The film is full of allusions like that, such as the scene with Sharon's wanderingbit of sandwich.

We all fantasize about "Gone with the Wind" love stories. But the reality's verydifferent. Sometimes insignificant or embarrassing things can trigger encounters.Some horribly embarrassing things have happened to me which, in retrospect,turned out to be hilarious as well as touching after all. In situations like that,you're far from posing, you're exposed. It's interesting.


With your keen eye for observation, you paid particular attention to thesecondary roles...

To me, secondary roles must be lively. If they're not, they have no reason to be inthe film. I wanted people to identify with them, for them to behave in ways peoplerecognize or in which they recognize their friends. I drew inspiration fromacquaintances or friends of friends. Others came about thanks to the actors whoplayed them, such as Jenkins, the manager. The actor made us laugh so much onthe short film that I wanted to write a big part for him. The atmosphere was verygood on the set and we were also able to use several improvisations.


Like your photos, the film is sometimes very sexy. Do you have a theory aboutthis?

No, there's nothing more subjective. I try to film things on instinct which Ipersonally find very sexy. As for the lighting, my experience just allows me to knowwhat will come out well, that's all. The rest is a matter of personal appreciation.For example, to go back to the Swedish au pair, it was one of the sexiestexperiences in my life and yet my memory must have embellished it quite a lot. Infact, when I think back to it now, I see the reconstruction I did for CASHBACK, andthe real memory of it has gone...