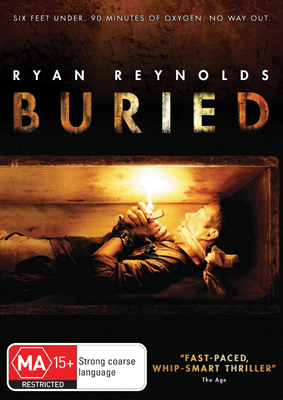 Starring Ryan Reynolds (X Men Origins: Wolverine, The Proposal) in his breakout dramatic role, Buried is one of the most thrilling movie experiences of the year.

Security contracter, Paul Conroy (Ryan Reynolds), wakes up buried six feet underground in a wooden coffin in the Iraq desert. He has no idea of why he is there and only a mobile phone and lighter to help him escape. With only 90 minutes of oxygen left, minimal phone reception and a dying battery - Paul is in a race against time in order to survive.

As the only actor on screen in this claustrophobic thriller, Ryan Reynolds is magnetic as a man desperate to survive and Cortes' narrative is tightly paced until the final cliff-hanger.

Big and Small
There are big stories and small stories out there. The size of a story does not depend on the vastness of a landscape, the number of characters, or so-called production values. Is The Old Man and The Sea a big story? Would it have been any bigger if Hemingway had added ten or twelve fishermen and thrown in a couple of extra sword fish? The size of a story cannot be measured in square feet and inches, but instead is dependent on one thing and one thing only… the story itself, whether what it tells us is interesting or not, whether it captures the spectator's attention and holds it throughout, and whether it makes us want to know what's going to happen next, or better still - need to know! Am I intrigued, am I fascinated, is time flying by without me even realising? Am I so entirely caught up in the story that I have to pinch myself to remind myself it isn't actually happening to me? If a story produces that kind of effect, then what we've got on our hands is a big story, a great story. If it doesn't enthrall us in that way, then it hardly matters one way or another if there are legions of Orcs, an inter-stellar fleet and the whole of the Red Army fighting it out for control of planet earth, the effect will be disappointing, the story will be small. 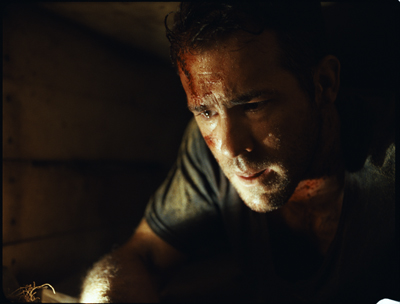 Thanks to a brilliant script by Chris Sparling, Buried is a big movie. It's a race against time that captures our attention and keeps us interested for an hour and a half from a narrative point of view without resorting to additional elements.

The Challenge
Buried has been a technical challenge of the highest order and through all the process there's been one key. Hitchcock. Hitch showed us how to shoot a whole movie in a boat in the middle of the sea (Lifeboat), or in one single shot in real time (Rope); once the cogs of the dramatic machine are oiled and in place, the next step is to conceive of the movie in your head, coming up with a list of shots which put together captivate the spectator, holding his attention without any let ups or distractions; the narrative should vary as the story unfolds, with different rhythms and an array of expressive options used to keep the material fresh and the spectator's eyes glued to the screen.

The golden rule for us was Never Go Outside to the Surface.

The screenplay itself was a great proof we could stay underground throughout the story without interest flagging for so much as an instant, and, indeed, the script conclusively demonstrates that just the reverse is true - we Ought To stay underground. A narrative divided between two parallel stories, for example, which allowed oxygen from the outside world to filter into the cinema too early, would have be an unforgiveable betrayal of the anguish our character feels ( which the spectator shares). Had we emerged into the light, maybe showing a solitary answer-phone in the hallway of a house bathed in morning sunlight, or focused in on the baffled expression of a telephone operator chewing on gum as she tries her best to deal with a very unusual call, we would have only succeeded in making a big film much smaller, a classy film much cheaper…, we would have ended up with more square feet and inches, and much less bang for our buck, turning a great suspense story into a bad TV-movie.

The audience has to be allowed to connect with the lonely desperation of a man who has no choice but to trust in the purely abstract, in the people out there who might be good or bad, who might be fat or thin, who might be who they say they are... but then again who might just not be - the voices which are ultimately nothing more than the electronic impulses sent out by a cold, anonymous satellite far away. The only reality our character knows for sure is the pure angst of his reduced, rectangular universe, the menacing darkness which surrounds him and this connection with an unknown outside world, a red-hot nail he has no choice but to desperately hang onto.

Shooting the Film
The rest was fairly straightforward in comparison. All that was required was to forget about the coffin as quickly as possible, to treat the location just like any other, not let ourselves feel limited by the space. The thing was to keep moving constantly, never allowing the film come to a standstill, making each and every movement a feat, each change of position one more chimera, each decision an adventure. We couldn't allow ourselves to feel overly limited by physics lessons from the school classroom, Paul Conroy had to move miles in his death throes. We delved into the box of visual tricks which allowed us to do this not according to the order of A, B, C, but instead in line with the needs dictated by the narrative, as the film engaged in a constant struggle to reinvent itself, never falling into repetition, always advancing in its visual fire-power following the most implacable narrative logic. Was the brusque, handheld tracking shot in the coffin really necessary? All that was required was to find the right way of doing it. Seven different coffins were designed for our different needs. The film tries to take something from Scorsese at his most playful, and the logic of Steven Spielberg's films from the seventies: no green screens, or high contrast nodes, nothing but the pure, sweaty pleasure of shooting; everything you see happened, from the shots when the camera circles around the character in an incomprehensible way, to those when it descends from above on the back of a Technocrane; the key thing was to get the spectator into the confused and tortured head of Paul Conroy, to make the spectator feel the dense dampness of his sweat, the suffocating heat, the lack of oxygen, the sand lacerating and eroding his skin, the rough, splintered wood, flattened-down nails, rusty and dangerous...

The film should constitute a Physical Journey of the Senses, an active Experience.

Ryan Reynolds
Buried was shot very quickly, demanding an enormous amount of concentration, enabling the film itself to feed on the precise, tense and rigorous energy felt on the set. There were six minute long takes with no cuts, creating the conditions for Ryan Reynolds to achieve an absolutely organic performance, allowing his emotions to grow and flow, bringing forth and spilling out like a torrent. The elements at our disposal were, objectively speaking, minimal, but far from considering that a disadvantage, we thought of the limitation as our greatest strength: only the essential remained. The tiniest dramatic detail of this microcosm was manipulated and carefully controlled, allowing the drama experienced by our character buried under the ground to be the main focus our attention. Ryan Reynolds is like a Stradivarius. The very best you can dream of. The narrative is full of emotional twists and turns: anguish, panic, desperation, calm, resignation, violence, denial, terror, hope, sadness, suffering, black comedy, exasperation, pain, fatigue… Ryan Reynolds searches for the truth in each and every shot, and his sense of timing is simply out of this world. How does he do it? How did he look for the best light at the same time as he screamed down his mobile phone - sending goosebumps down the spine - and still come across as firm but never at the cost of empathy? How did he subtly alter his voice as it builds, until finally letting it break down in a controlled way, always with a perfect sense of timing? Or else hit the torch with his fist during each tiny pause, without ever drowning out the dialogue, at the same time turning to avoid a shadow and help make a camera movement more seamless, turning the direction of the torch ever so slightly, shining the light against his chest to illuminate the right side of his face when the sand covers the light for just a second? Nobody knows how he did all these things, how he did them every day over the course of three weeks. Ryan went back to Los Angeles a physical wreck; no doubt he had to justify to US customs officials why sand trickled to the floor whenever he blinked. His sense of commitment went simply beyond the call of duty. 17 shooting days, no more. 25 shots each and every day. Sometimes 30. Or even 35. How did we do it? I don't even know myself... which I guess can only mean we didn't do it. 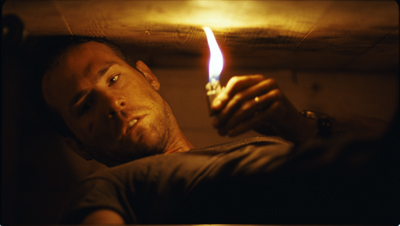