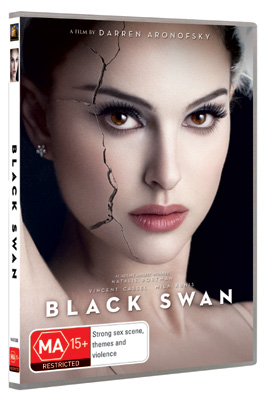 EXPERIENCE THE TWISTED YET INSPIRED MASTERPIECE LIKE NEVER BEFORE

Nominated for five* Academy Awards® including Best Picture, and starring Natalie Portman in her Academy Award® winning role, BLACK SWAN is a seductive yet haunting film that will leave you breathless. Directed by innovator Darren Aronofsky (The Wrestler), the film boasts a wealth of talent including Natalie Portman (Closer), in the performance of her career, as well as Mila Kunis (Date Night), Winona Ryder (Girl, Interrupted) and Vincent Cassel (Ocean's Twelve). In the film, Natalie Portman's mesmerizing transformation into the Black Swan leaves you breathless - and wanting to see it again. Become part of the haunting phenomenon and own BLACK SWAN on Blu-ray or DVD on June 1 from Twentieth Century Fox Home Entertainment.

BLACK SWAN follows the story of Nina (Natalie Portman), a ballerina in the New York City Ballet trying to make it to the top. When artistic director Thomas Leroy (Vincent Cassel) decides to replace prima ballerina Beth MacIntyre (Winona Ryder) for the opening production of their new season, Swan Lake, Nina is his first choice. But a new dancer, Lily (Mila Kunis), also impresses Leroy and becomes Nina's competition. Nina fits the White Swan role perfectly with her innocence and grace, but Lily is the personification of the Black Swan with her fiery personality. As the two young dancers expand their rivalryinto a twisted friendship, Nina begins to get more in touch with her dark side with a recklessness thatthreatens to destroy her.

The BLACK SWAN Blu-ray disc contains special features not included on the DVD including excitingbehind-the-scenes looks at the filmmaking process and interviews with the cast and director DarrenAronofsky. With the best-available sound and picture quality, the Blu-ray format provides viewers thepremier way to experience the stunning Academy Award®-nominated cinematography, memorable characterperformances and flawless choreography of BLACK SWAN.

BLACK SWAN Blu-ray Features:
Metamorphosis: A Three-Part Series
o A behind the scenes look at the filmmaking process from Darren Aronofsky's visionary directing, to the physically-demanding acting, to the stunning special effects.
Behind the Curtain
o An inside look at the film's costume and production design.
Ten Years in the Making
o Natalie Portman and Darren Aronofsky discuss their creative journey, from "preparing for the role" to "dancing with the camera."
Cast Profiles - Roles of a Lifetime
o Presented by Fox Movie Channel, the stars reflect on the their challenging and rewarding characters