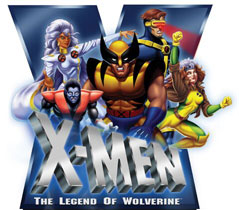 The most popular super hero team in history come together in this action-packed animated adventure. When a familiar face from Wolverine's former life resurfaces, he must wage a war he never intended. Ultimately, the X-Men must join forces with Magneto in a fight to save all mutants from annihilation. Discover the truth of Wolverine's secret past, and watch his decisive battle as he is forced to make a choice that will forever affect the fate of the X-Men!

X-Men : The Legend of Wolverine is available 7 May on DVD and video.

Power Rangers Wild Force: Curse of the Wolf (on video)

Intent on defeating the Rangers once and for all, Master Org releases an Org General, Nayzor, from his stone tomb. Nayzor in turn releases Zen-Aku, a wolf-like mechanical beast who has been imprisoned for three thousand years.

After a fierce battle in which Zen-Aku combines his Dark Wild Zords to form Predazord and defeat Megazord, Zen-Aku gains control of Giraffe Zord.

Zen-Aku also gains control of the Bear Crystals but as things begin to look bad for the Rangers, Zen-Aku remembers parts of his past and becomes friendlier. Could it be that Zen-Aku was once a friend to the Rangers?

Power Rangers Wild Force: Curse of the Wolf is available 7 May on video.

Zen-Aku, the strange wolf creature, is still confused about his identity. Seeking revenge against the Rangers, he is puzzled by his apparently human tendencies when he rescues a wolf pup.

During a lunar eclipse however, Zen-Aku suddenly transforms to his real human form - that of Merrick, a powerful warrior. Merrick explains to the Rangers that 3,000 years ago he put on the wolf mask to defeat Master Org, but was then cursed to become Zen-Aku. Princess Shayla orders the Predazord destroyed, believing this will destroy the curse. The Rangers vanquish the Predazord and Merrick becomes himself again!

Will this once very old friend become the Rangers' new friend and say with them?