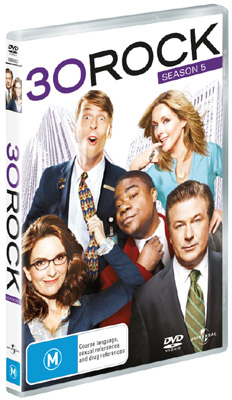 Tina Fey stars as showrunner Liz Lemon and Alex Baldwin is corporate executive Jack Donaghy in this behind-the-scenes romp about sketch show 'TGS', its neurotic stars, Tracy Jordan and Jenna Maroney' hapless NBC page Kenneth Parcell and the rest of the bedfuddled crew working to create the 'magic of television'.

Picking up from the finale of Season 4, Jack and Liz fight to retain control of the show and their personal lives, despite the chaos backstage at The Girlie Show with Tracy Jordan and the celebration of the 100th episode which, for the first time in the show's history, features a live studio audience.

Bought to you by the folks at GE Kabletown, it's a season of video obituaries, cross-dressing love, page showdowns, Canadian births and other strange events in 22 blerg-worthy episodes from executive producer Lorne Michaels.