Amy Brenneman stars as Dr. Violet Turner in the medical drama, Private Practice. With the Season Four DVD out now, the accomplished actress reveals her thoughts on family life, finales and 40-year-old flirts...

Question: First things first... You're sporting a new look in Season Four of Private Practice. How did that come about?

Amy Brenneman: I had my haircut this season because I wanted a change. It's the first time I've cut my hair this short since seventh grade! I was really freaked out to see the back of my neck for the first time in years - but so far, so good. I used to have so much hair that I would spend an hour and a half in the hair chair at work every day before heading onto the set. It's been fantastic to cut down that hair time.


Question: What can you tell us about the surprise wedding for Violet Turner at the start of Season Four?

Amy Brenneman: It's a great surprise on the show because Cooper [played by Paul Adelstein] and Charlotte [played by KaDee Strickland] are engaged, so the audience was expecting them to marry first. Pete Wilder [played by Tim Daly] and my character are busy trying to figure out how they are going to parent their child - but then the big surprise at the start of Season Four sees them heading down the aisle. It happens very spontaneously, but it was a lot of fun to shoot. I was really excited about the storyline because I thought it was a great way to start the season.


Question: Dell Parker [played by Chris Lowell] dramatically died in the finale of Season Three. How have the other characters in the show adapted to his departure?

Amy Brenneman: In the first draft of the script for the Season Four premiere, there wasn't a lot of talk about Dell - but we all thought that he was such a huge part of the show that it needed to be spoken about. We all miss Chris Lowell dearly on set, so it's great that he's mentioned. We knew that Season Three's finale was going to be his last episode, but we never know the exact stories of what's going to happen until we read them in the script. I loved Shonda's sneaky plotline in that episode. All of the focus was on Maya Bennett, so it was devastating to discover the demise of Dell.


Question: Private Practice was a spin-off to Grey's Anatomy when it first started. How easy has it been to forge the show's own identity?

Amy Brenneman: Watching our show come together was like watching a child break out of the shadow of its older sibling. The cast of Private Practice is ten years older than the bulk of the cast on Grey's Anatomy, which is something that Shonda brought to the forefront. How does a 40-year-old flirt versus a 30-year-old? We tackle the concerns of a slightly older group of people, be it fertility or family or medical worries. These are not people who are starting out in their medical careers, which is what Grey's started as. These are established characters who have gone through much more in their lives.


Question: Violet and Pete come together to raise their child, Lucas, in Season Four. Has this made you broody for more children?

Amy Brenneman: It's funny you should mention this because I am trying to persuade my husband to have a third child. Unfortunately, he's not biting right now. He says, "I think we're good." He's correct, we are good and I think two is probably right - but I love little babies. They are so cute.


Question: Do your children understand what you do for a living?

Amy Brenneman: Yes, they do. They play-act all day long - it's their favorite thing to do - so they understand pretend and make believe. If my son visits me on set, or even if I'm just talking about it, I'll explain to him that I'm telling a story. One day my son looked at me and I said, "Yeah that's what I do for a living. Isn't that awesome. He loved it. It's an ancient activity, to pretend to be somebody else.


Question: What's your idea of the perfect family time?

Amy Brenneman: My children are now old enough for us all to relax. We live in the San Fernando Valley in California where it gets very warm, so we spend a lot of time in the water. We go to the beach a lot. I think we - the kids included - live a pretty structured life during the week, so we really don't do much at the weekends. We just lie around. That's bliss to us.


Question: How important is it for children to get an education before choosing a career?

Amy Brenneman: When I was younger, there was no question of me not going to college because that's what everybody did in my family. There was no way I was going to get out of that. I went to Harvard, but I didn't study acting; I studied comparative religion. However, I was always into acting and I started by forming a theater company right out of college. I eased myself into the industry. I didn't come to Los Angeles or get an agent until I was in my late twenties. I took my time, but it all worked out - and now I'm happier than ever. I couldn't wish for a more fun or more interesting show to work on than Private Practice. It's fantastic. I have the best job in the world. 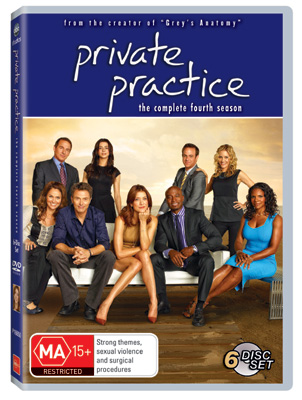 Experience every complex romance, medical crisis and moral dilemma of ABCs Private Practice: The Complete Fourth Season. Dont miss a moment of TVs sexiest drama, from the creators of Greys Anatomy. Its a season of change and new hope for Dr. Addison Montgomery (Kate Walsh) and her colleagues at the Oceanside Wellness Group. Relive all 22 captivating episodes in this spectacular 6-disc collection, complete with never-before-seen bonus features. ABCs Private Practice is riveting drama at its best!

BONUS FEATURES
An Inside Look: The Violation of Charlotte King Bloopers Deleted Scenes