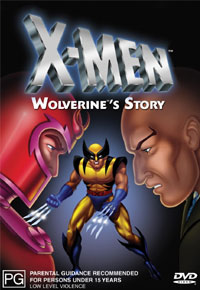 The story unfolds when a powerful band of villains set out to destroy the X-Men. To combat their common enemy, long time rivals Professor Xavier and Magneto must join forces to keep the mutants from being annihilated. The action-packed adventure will keep you on the edge of your seat and the plot will keep you glued to the small screen as this movie unfurls one the greatest mysteries - the origin of one of the most powerful and popular X-Men; Wolverine! As Wolverine tracks down the man who made him what he is, Rogue, Cyclops and all your favourite mutants wage an all-out war for their own survival.

To unravel the Wolverine's past and find out the destiny of the X-Men, don't miss this original story in this series of classic X-Men adventures.

An all time breathtaking Disney classic, SLEEPING BEAUTY unfolds a tapestry of romance, suspenseful adventure, heroism and faith in finding one's-true-love. Teamed with Disney's trademark humour and enthralling music, SLEEPING BEAUTY is packed with entertainment for the whole family.

Once upon a time, in a kingdom far away, a beautiful princess was born. Princess Aurora, fated by a terrible curse to prick her finger on the spindle of a spinning wheel and die at the age of 16, falls into an enchanted slumber to become SLEEPING BEAUTY.

Princess Aurora's magical friends, the Good fairies Flora, Fauna and Merryweather do their best to protect the Princess by raising her in a forest cottage disguised as Briar Rose. Despite their loving attempts, the evil fairy Maleficent finds Aurora and the spell is cast.

The good fairies put everyone in the castle into a deep sleep until the curse can be broken. It is only with the aid of the gallant Prince Phillip, who vows to save his adored princess that the wicked Maleficent, transformed into a menacing, fire-breathing dragon, is destroyed, and the SLEEPING BEAUTY is awakened by his kiss.

SLEEPING BEAUTY is Disney's most luxuriant feature, with unparalleled attention to detail and bold stylisation in the use of colour, character, and background design.