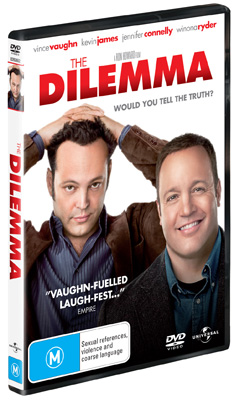 From Oscar® winning director Ron Howard and starring the ultimate comedic duo, Vince Vaughn and Kevin James, comes The Dilemma, a story of how far one can bend a brotherly bond before it snaps.

Having been friends since college, confirmed bachelor Ronny (Vince Vaughn) and happily married Nick (Kevin James) have been through the best and worst of times. Now partners in an auto design firm, the two pals are vying to land a dream project that would take their company to the next level.

When Ronny inadvertently sees Nick's wife with another man, his world is turned upside down and he makes it his mission to get answers. As his amateur investigation rapidly dissolves his world into comic mayhem, he learns that Nick has a few secrets of his own. Now, with the clock ticking and pressure mounting on the biggest presentation of their careers, Ronny must decide how and when he will reveal the truth, and in doing so realises that what you don't say to a best friend is just as important as what you do.

Featuring a star studded supporting cast including Jennifer Connelly, Winona Ryder and Channing Tatum and packed full of exclusive special features, The Dilemma on Blu-ray and DVD is a feel - good comedy that takes viewers on a hilarious exploration of the complexities of life, love and loyalty.

Question: You've worked with Martin Scorsese, Tim Burton, Francis Ford Coppola. Was Ron Howard one of those big names you wanted to add to that list?

Winona Ryder: Actually, very much so. We didn't grow up with a TV but when we finally got one, I do remember Happy Days. But my love for him came from Parenthood. That's still one of my all-time favourite movies. I think he's just an amazing director. He's got a real reputation in the movie business of being a great actor's director, and a really good guy, and a solid person. People, they get reputations. And he's always had such a great reputation. I think the highest compliment you can pay a director is to say they're an 'actor's director' because you have to feel as an actress... when you feel safe and supported, that's when you do your best work. So to me he was definitely up there with all the greats.

Winona Ryder: Yeah. He's exactly how he comes across in interviews. I met him at parties and he was so sweet. He was really like that all the time. And I think that comes from him having a great marriage, a great family, and just being a really solid person - which is very rare for someone who grew up on screen from when he was a toddler. He's been acting in Hollywood and he became a director later. But it's amazing how he has stayed so grounded and approachable without it being weird, because he was in our homes with those TV shows!


Question: Did you have fun playing Geneva? She seems almost schizophrenic when she turns on Vince's character...

Winona Ryder: Yeah, well there is that scene - the diner scene, which was very challenging, in a good way. To answer your question, I actually have great empathy for her because I think she's someone who would so much rather be working on her marriage with her husband, because its falling apart and she doesn't want to lose him, than doing what she's doing - which is her coping mechanism. But that scene where she does show Vince what she will do to protect her situation... we called it 'the gun on the table scene' and the 'high noon scene'. It was such a great scene, so challenging - the timing had to be perfect for when the tears came. And it was very, very difficult, but in that really gratifying way. I just remember in the days leading up to it Vince was so supportive and so generous. He's the kind of guy who's like a volcano - he erupts with the best lines and ideas. And he'll come up with something and go, 'You know what? You should say that, because that would be really funny coming from you.' That is unheard of for actors! But he is that kind of guy - he's so generous. A lot of the lines in this, that got the biggest laughs, whether or not they're coming from him or another character, are things that he came up with.


Question: You've had some great comedies in your career like Heathers. But I guess you've done more dramas. Was this a way of redressing the balance?

Winona Ryder: Well, it wasn't a strategic move. I feel just so humbled and lucky to have got the part. To be honest, I didn't really think I would get the part. I loved it, and I met with Ron personally. And then a month went by and they asked me to come in for Beth. I did all this work and then at the last minute they said, 'Oh, we want you to come in for Geneva!' So it was one of those situations where I feel so humbled to have got the role. And it wasn't strategic - like I think I should do a comedy now. I just wanted to do a great movie. Great movies are great movies, whatever genre they're in. But I feel like this is a great comedy with a lot of heart.


Question: You're also in Black Swan. Does it feel like a really big year for you?

Winona Ryder: It's weird. I've definitely been working a lot. It's hard, thinking about things in retrospect. It's a small role - but it's a great role. I remember, we shot it all at night, and the dancers were training. Natalie trained for a year, which really shows and she's phenomenal in it. But it was a tiny crew - with no money and the script was so interesting, and kinda weird. It's one of those movies where you go 'Is this gonna work or not?' because it's about the ballet world and she's hallucinating. And then it worked! When I saw it, I was blown away. So I did that as a chance to work with Darren and Natalie, and I had no idea that it would be what it's become. But I'm not surprised at the same time. He's that kind of director. Then on the other side of it, I had this movie, which was equally as challenging. I did find Geneva to have so many layers and be very complex. And I really wanted to humanise her and not make her a bitch - I think she does have remorse and is coming from a place of pain, and it's hard to put that in a comic situation. But that's why it works - when actors try to be funny, they're not! Heathers...I played that role like it was a complete drama and it's a hilarious movie. I'm not saying because of me, but the director had us play it like it was serious, and it worked. So hopefully this will... it's a great conversation piece of a movie. People leave going 'I don't know what I would do!'


Question: What would you do?

Winona Ryder: I don't know! What would you do?

Winona Ryder: See! I don't know. I think I would tell but then if my friend was going through all this crazy stuff, it would be a timing thing. It's taking a big chance. I don't know what I would do but I like that it brings that up.