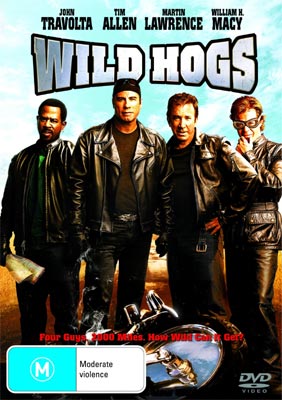 Four middle-aged men (Tim Allen, John Travolta, Martin Lawrence, William H. Macy) decide to take a road trip from Cincinnati to the Pacific in order to get away from their lives which are leading them nowhere. Taking their motorcycles, these "Wild Hogs" tear up the road and eventually stop in New Mexico for a drink not knowing that the bar belongs to the "Del Fuegos" - a mean biker gang. When the Del Fuegos steal a bike that belongs to the Wild Hogs, the four men form a plan with the local town to steal their bike back.

Have your engines ready because WILD HOGS, the feel good-hilarious hit comedy of the year.

With an extraordinary star-studded cast, featuring the likes of JOHN TRAVOLTA, TIM ALLEN, MARTIN LAWRENCE and WILLIAM H MACY, WILD HOGS is the story of four best buddies breaking out from mundane suburban routine, and hitting the open road in search of freedom, adventure and self-discovery.

The story begins when Woody, played by JOHN TRAVOLTA, whose recent film sensations include Ladder 49 and Swordfish, hits rock bottom following his divorce and bankruptcy. With nowhere to go, and an itch to hit the road, he turns to his three closest friends - all members of the WILD HOGS motorcycle club, to join him on the road trip of a lifetime.

Woody is not alone in his mid-life crisis. Each of his friends have their own demons to contend with. Doug, played by the hilarious TIM ALLEN, star of the hit Santa Clause films and TV's Home Improvement, is a bored dentist losing touch with his son and dreaming of his wilder, younger days. MARTIN LAWRENCE is Bobby, a 'wife-whipped' plumber searching for self-confidence, while the wonderfully eccentric WILLIAM H MACY is Dudley, a lonely man in search of love.

The WILD HOGS embark on a wild and uproariously funny journey across the USA to the Pacific Ocean, but traction becomes action when they are confronted by real-life bikie gang, the Del Fuegos, led by the brilliant RAY LIOTTA (Goodfellas). The WILD HOGS find they must band together and learn to face their fears, and in doing so they realise they've set out on a journey of self-discovery and friendship.

With the addition of brilliant cameos, WILD HOGS is superb viewing and a DVD not to be missed! Fantastic bonus features include Deleted Scenes, The Making of Wild Hogs and Audio Commentary.

Hit the road with your favourite-funny men, John Travolta, Tim Allen, Martin Lawrence and William H Macy, as they rev their engines and road-trip across the United States - on the run from a dangerous bikie-gang and their own mid-life crisis's!

WILD HOGS is a trip to the wild side that will make you think it's time for a journey of your own!