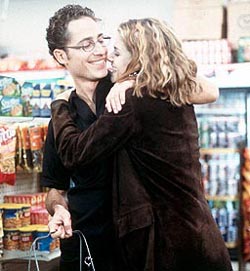 They fancy themselves as Tom Cruise in Risky Business, Mickey Rourke in 9 1/2 Weeks and Andrew McCarthy in St. Elmo's Fire. They're more like The Three Amigos.

Nevertheless, Brad, Zeke and Jonathan are on the prowl day and night trying to score. Lies, deception, betrayal - they're so desperate, these guys will go to any lengths to bed a babe - and then, of course, they get together to brag (and lie) about it afterwards.

So it's only fitting that when these three finally meet the girl of their dreams, it's the same girl. Yep, at last, they've met a girl as two-timing (make that three-timing) as they are and oh boy, are they about to get a taste of their own medicine!