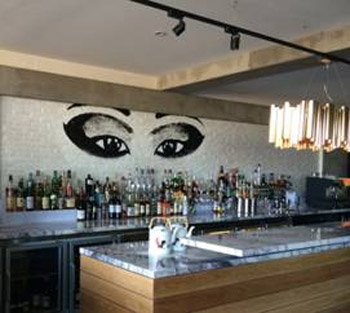 Max Tsang comes from a family of Chinese rice merchants, and in the summer of 1999 at the tender age of 18 he packed up his belongings and with just his extrovert personality, endless energy and very little English ventured to Australia. Eight years on he opened Mahjong which was best known for its yum cha, dumplings and, well....Max.

Now, another eight years have passed and he's decided that a new bar area, and a more regionally inspired menu are needed and so began the evolution into ...Whatever by Mahjong.  The name refers to his -whatever' attitude when he landed here 15 years ago.

The first thing you'll notice is the huge decal that surrounds the large front windows looking out across Fitzroy St to Albert Park and new street-side furniture. Indoors there's a huge expanse of bar to the left, and a separate casual dining space to the right - the new look decor has been brought together by the brilliant designer Wayne Finschi of Finschi PHD Interiors.

Wayne describes the new look as Chinese minimalism. Large black steel multi-framed room dividers separate the expansive main room into two zones – both decorated with a muted palette. The bar is now the focus and the décor features blond European oak woods, high polish raw concrete floors. White on white and greys are punctuated by black accents and luxe fixtures. The mahjong tiles of the past have been replaced by images of hauntingly beautiful Asian faces.

Farewelling the tradition of yum cha and just about everything beyond the front door, Max's focus is on the bar space, its drinks and bar food. It's a new direction for this young restaurateur, but he feels it's one he needed to take to keep abreast of trends.

The Bar – Cocktails are the star from 'Buddah's Wife' with lychee and rum, to a 'cumquat mint Mojito', Hainan iced tea, The Silk Route and Chin Dynasty. There will also be beer on tap in coming weeks, alongside ciders and boutique beers - all served beside China's -bits n pieces' Xiao Chi.

Menus – The Xiao Chi (bits n pieces) will be available all hours across the bar, then in the casual dining area the various provinces of China will be featured on a separate menu. China's regional cooking has its own trademarks and variations, from the cold snacks, broths and soups of Fujian, to the garlic and smoky chilli flavours of the slow cooked dishes of Hunan, the peppery pungency and spices of the Szechuan province, the dark pastes and fermented tofu of Beijing, the noodles of Han Xi'an in the north, to the lighter dishes and flavours of Canton.

Admitting that there would be a riot if he didn't continue to serve his famous prawn dumplings, they will again have a space on the menu which is split into four - small, big, bigger, sides and sweets. He's also accommodating his army of fans with his -Good old days' choices and there will be the new -Bring it on' set menu for longer visits.

At the table - Another signature of Max's youth will be his choice of retro plates – he is reverting back to the willow-ware' of his childhood. With it's gentle blues and whites fitting the décor perfectly. Chopsticks are in a tin on the table beside a stack of good luck -rooster' bowls, and the menu is on the placemat, all adding to the casual feel.