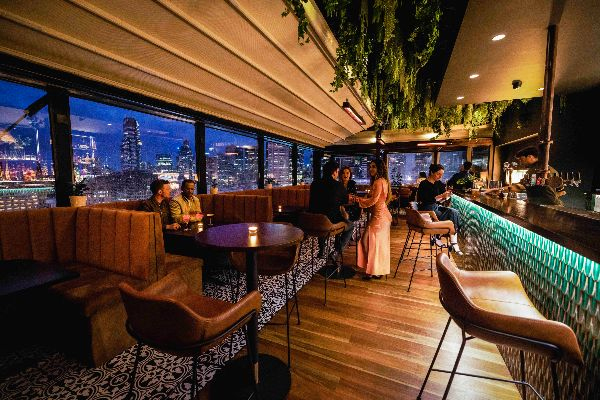 "We have completely redesigned the structure of a 14th floor rooftop to create a destination bar experience like no other, where people can drink and dine until the early hours," says Gehan.

The venue design is stylish, eclectic and warm, with salmon seating booths, an Italian green tiled bar front and wooden accents. Three quarters of the venue has a retractable roof, for all season dining.

"Our vantage point of the city skyline is unique. Melbourne's tallest skyscrapers seem to be gathered around to reflect the setting sun, before they sparkle into the night. It feels like you're in NYC or Tokyo."

Bookings are now open via fablemelbourne.com.au, ahead of the official launch on 19 November.

Under venue manager and notable mixologist Alessandro Nardini (Beneath Driver Lane, Nick & Nora's, Loch & Key), the "light and full of flavour" cocktail menu tells a story with every drink, uses aquafaba instead of egg white, and is mostly gluten-free and vegan friendly.

"A cocktail is more than just a drink to me, I like to consider elements beyond the physical ingredients, proposing a bit of history behind the drink and creating an experience for my guests. At Fable, storytelling is what we do. Our menu of signature drinks playfully pokes at memorable moments in European history, while also honouring the classics," says Alessandro.

A signature spin on the classic Bloody Mary, Ropespierre's Faith, tells a tale of karma during the French revolution, while the Singapore Sling inspired Borgia's Plot riffs on the most famous, and most scandalous family of the Italian renaissance. Historically a famed elixir by an Italian alchemist, Elisir Lungavita is the moniker of another Fable libation that won a place in the Amaro Montenegro World Competition, a refreshing take on a spritz with thyme, rosemary, lemon and grapefruit sherbet.

"Since I became coeliac two years ago, I know all too well the uncomfortable feeling many people deal with when they can't find anything on the menu that won't make them sick. I have curated our cocktail list to look after people with gluten free and vegan dietary requirements, without compromising on creativity and exceptional taste," says Alessandro.

A menu inspired by the Mediterranean complements the drinks, by Executive Chef Alex Xinis. After helming a two Michelin-starred kitchen in Greece, Alex became the head chef at Melbourne Press Club before the venue achieved its second Good Food Guide hat.

Fable Melbourne is open from 5pm-1am Wednesday, Thursday and Sunday, and 5pm-3am Friday-Saturday. As summer continues, trading hours will extend to accommodate Aperitivo time from 2pm. Alessandro Nardini and his 2IC Alessandro de Gorgio grew up in parts of Italy where Aperitivo was "almost a religious thing", so stay tuned for something quite special.

Bookings are required until 19 November, when walk-ins will be available (late night walk-ins are encouraged). Group bookings are capped at 8 people. More information on special events and the venue's upcoming membership program is still to be announced.

Fable is tipped to become another Melbourne institution, a destination for after work and late night get togethers, with an open-air vantage point that is unmatched.