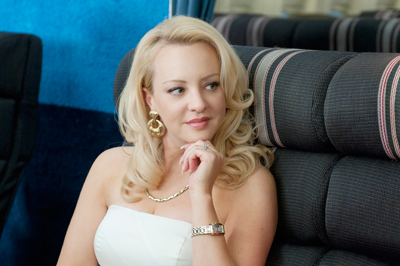 Question: Can you explain a little about your characters and maybe what drew you to them or what you liked about them?

Ellie Kemper: My character Becca is a newlywed who just loves mentioning that fact and talking about her husband. She is a little deluded, and by "little", I mean totally! She has a very idealistic view of marriage which I don't think is going to lead to a lifetime of happiness, either in regards to her marriage, her career, or friends or family. What do I like about her is that I appreciate she wants to think the best of people. She believes that the path to happiness is through being very tame, and whilst I don't mean that a marriage has to be wild, it's not healthy to be in a very restrictive marriage.

Wendi McLendon-Covey: Becca (Kemper) wants children very badly and that is not going to happen, because they are not...

Ellie Kemper: They are not actually doing it.

Wendi McLendon-Covey: ...they are too busy showering and singing hymns. My character, Rita (McLendon-Covey) is a mother of three brats, but she's kind of a brat herself so I don't think she understands that she's leading by example. She's the oldest bridesmaid, the cousin of the bride, and she needs a bachelorette party to get her through the rest of her marriage. She's got a perfectly nice husband but she's not happy with him - she's been with him a while, she's seen it, she's done it and she wants something else. What she actually needs to do is work on herself but it's much easier to complain to your friends so that's what she does! She takes poor Becca (Kemper) under her wing and says, "Hey, your marriage is not normal - what you are doing is really weird. I'm not saying you need to be doing what I'm doing, because that's weird too..."


Question: I did really enjoy the scene on the plane where you are mentoring her, but being slightly bitter as well. Was that fun to shoot?

Wendi McLendon-Covey: It was. And it went off in so many other different directions - I have such fond memories of that scene....

Ellie Kemper: The kiss, that's what was nerve-wracking for me...

Wendi McLendon-Covey: For both of us.

Ellie Kemper: ...because you want it to play right.


Question: Did you enjoy that how it was written, and from the improvisation you did, the script is true to the way women really talk, a little bit crude, more realistic?

Ellie Kemper: Yes exactly. It's a lot more realistic. I'm so happy that that was the case, and that it wasn't just full of puns or stuff.

Wendi McLendon-Covey: And the ladies seem to like it. We get a lot of compliments from women saying, "Thank you! Yes, that is how I talk with my girlfriends."


Question: You had some of the most cringeworthy lines about your three boys - "cracking blankets" and things.

Wendi McLendon-Covey: Yes, about the sticky habits that they might have.


Question: Was there any line you had where you thought, "I can't believe I have to say this?"

Wendi McLendon-Covey: Yeah, and you will see this on the DVD extras for sure. I had to say: "After three kids, I look like I've got a fanny pack down here. I've got a flesh fanny pack and it's just hanging down. Honestly, it looks like a tennis skirt, I'm so embarrassed." She just gives this long rundown how ugly she thinks she is and goes, "I've got this big blue vein that runs this way, and bite marks over here, and one of my boobs is bigger than the other..." She just keeps going and going and going, one of those 'too much information' ladies where you're saying, "Hi, what was your name again - now that you've told me about every scar on your body, should we introduce ourselves?"


Question: You can't have much vanity as a comedic actress, but we have to talk about the food poisoning scene: how was that to shoot?

Ellie Kemper: It was hard to remain 'ladies'. I ran in at the end, so I didn't have to spend as much time over a toilet as you did.

Wendi McLendon-Covey: She only had to throw up in my hair a couple of times. I had to do it from different angles.

Ellie Kemper: I swear that toilet did smell. You're being nice but it did smell.

Wendi McLendon-Covey: I blocked it out. The good thing about this scene was that all of the gross stuff was prompted by the fact that we had eaten some bad food - it wasn't just about doing it because it was funny or shocking. The point of the scene was to humiliate Annie (Wiig) for getting us sick. It showed all of us trying to act like we weren't sick until the very last minute ...and the damage that you can do to an all-white, perfect dress.

Ellie Kemper: Okay, maybe I'm gross, but I thought it was good. It was sweet and oatmeal-y. I had M&Ms in mine.

Wendi McLendon-Covey: Mine was just oatmeal and water and food colouring, so it tasted a bit like the morning. Very wholesome and full of fibre. I would do it again.


Question: Can you talk about working with director and producer, Paul Feig and Judd Apatow? What did they bring to the set?

Ellie Kemper: I love Freaks and Geeks, so being able to work directly with them was incredible and they were so encouraging and supportive. I was never scared of them - but it was such a nice, open and communicative relationship.


Question: Can you talk about working with Kristen (Wiig) too? This is finally her first big lead that we've all been waiting for.

Ellie Kemper: Kristin is somebody without vanity, without ego. She is so funny, talented, smart, and kind. I can't imagine how much is going through her head but she always, always had time for everyone.

Wendi McLendon-Covey: She is a funny lady but she let us all have our moments, which is very generous of her as an actress.

From producer extraordinaire Judd Apatow, and co-written by Kristen Wiig and Annie Mumolo, comes the take home comedy of the year Bridesmaids. This is a story about growing up and breaking down, boasting an allstar cast of Hollywood's sharpest comedians such as Kristen Wiig, Maya Rudolph and Melissa McCarthy as well as Australia's own Rebel Wilson.

Kristen Wiig stars as Annie, a down-on-her-luck thirty-something whose life is a mess. Annie is unlucky in love, has lost her business, is behind on her rent and has just been handed Maid of Honour responsibilities for her best friend Lillian's (Maya Rudolph) wedding. Annie attempts to rise to the challenge by leading a collection of Lillian's socially challenged friends (Rose Byrne, Melissa McCarthy, Wendi McLendon-Covey and Ellie Kemper) through a series of pre-wedding rituals in the name and traditions of marriage.

As the wedding approaches, rivalry between Annie and fellow bridesmaid Helen (Byrne) intensifies, leading to a number of hilarious confrontations as they fight for Lillian's affection. Critically acclaimed, Bridesmaids is sure to strike a chord with men and women alike, as it's essentially a story that has friendship at its heart. The perfect film for a girls night in and a must have gift this Christmas.

Blu-ray:
All SD Content
Made of Honor: Behind The Scenes Of Bridesmaids
Blind Date
Roommates
Drunk-O-Rama
Pep Talk
Annie vs Helen
Hold On
Punch Me