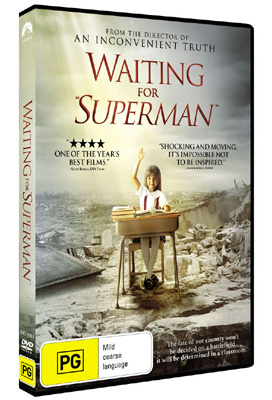 Academy Award®-winning director Davis Guggenheim (An Inconvenient Truth) delivers anotherprovocative film experience with his compelling and inspirational examination of American publiceducation in WAITING FOR "SUPERMAN", arriving on DVD on 21 July, 2011 from Paramount HomeEntertainment.

Named the Best Documentary of the year by the National Board of Review (US), and cited by theAmerican Film Institute as one of the year's best movies, WAITING FOR "SUPERMAN" was called"an electrifying call to action" (Peter Travers, Rolling Stone), and has launched a movement to achievereal and lasting change in America's schools.

The film depicts the moving and poignant struggles of real-life students and their families and the efforts of educators and reformers who are working to find viable solutions within a dysfunctional system. A stirring, must-see clarion call that has left audiences inspired and motivated to make adifference.

"I think that every kid, no matter where they are born or what they have been given in life, deserves agreat education. The idea of education reform becomes a lot less abstract and a lot more compellingwhen you see these beautiful kids and realise all their potential," said director Davis Guggenheim."Now there are reformers out there who are defying the odds and proving it's entirely possible to createoutstanding schools even in the most troubled neighborhoods. That's what drove me to tell this storyand to make this movie."

"Even if you don't have kids, you should care about public education," said Lesley Chilcott, producer ofWAITING FOR "SUPERMAN". "If we want to solve global warming, poverty, health care and theeconomy, we need to have an educated society. Education is ground zero for tackling all these issues."In addition to the inspirational film, the DVD features four additional stories of real students andteachers, commentary by Davis Guggenheim and Lesley Chilcott, a conversation with DavisGuggenheim, the making of John Legend's original song "Shine", which was composed specifically forthe film, a look at what's changed in education since the movie was filmed and more.

Special Features
- Changing the Odds: A poignant look into the challengesstudents and teachers have faced within the Americanpublic school system and the successful programs thathave been put in place to change the face of publiceducation in the U.S.
- Updates: A look at what's changed in education since themovie was filmed
- A Conversation with Davis Guggenheim, Director
- The Future is in Our Classrooms
- The Making of "Shine"
- Deleted Scenes: Four additional stories of real-lifestudents and teachers (Keith and Tiffany, Locke High andSteve Barr, Bill Strickland, The Green Family)
- Commentary by director Davis Guggenheim andproducer Lesley Chilcott

One of the "Top 10 Movies of 2010" - Time MagazineFROM THE FILMMAKERS BEHIND THE OSCAR! WINNING FILMAN INCONVENIENT TRUTH COMES AN ENGAGING, INSPIRING AND PROVOCATIVE LOOKAT THE AMERICAN PUBLIC EDUCATION ANDTHE EXTRAORDINARY PEOPLE WORKING TO CHANGE IT