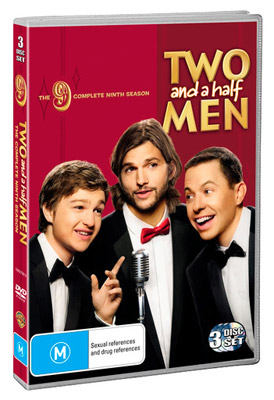 When hopelessly nebbish Alan Harper and his fast-maturing son Jake suddenly find themselves without a place to call home, their solution walks in off the beach in the form of Internet gazillionaire. Walden Schmidt, who buys the Malibu beach pad and offers to let Alan and Jake stay. Soon, the three guys bond, forming a substitute family, and finding themselves involved in all sorts of comedic exploits that views have come to expect from Two And A Half Men. As the season unfolds, Walden turns to Alan for advice on his forlorn love life, Jake considers his future as a high school graduate, Walden considers the upside of Berta's special brownies, and Alan has a brush with death - and even worse - a life without a view of the ocean.


Special Features:
2.5 Men, Version 2.0: Experience the excitement of Ashton Kutcher's first night on stage, through backstage footage, crew and talent interviews.
The Billionaire Upgrade: Walden Schmidt's Malibu House Redesign: The Harper House is due for a makeover when Walden Schmidt snaps it up, and it's up to the crack production design team at Two and a Half Men to express Walden's personality in a big overhaul of the show's signature set.
Gag Reel